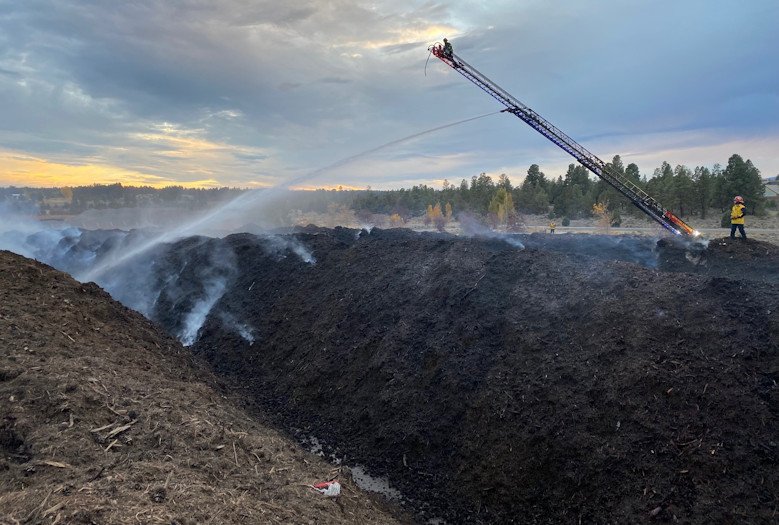 Bend Fire & Rescue crews arrived around 5 p.m. to find several large piles burning, spread b a strong north wind, said Deputy Fire Marshal Dan Derlacki. They stopped the fire’s spread with water from a ladder truck that allowed them to reach all areas of the large fire, he said.

The piles are reported to contain up to 20,000 yards of yard debris, ground down into mulch. The fire affected about 2,000 yards of material.

The product goes through a process of decomposition in piles to eventually create compost, Derlacki explained. During the composting process, heat is generated, which helps break down the material and eliminate unwanted seeds from weeds and noxious plants, Derlacki said.

“In this case, it appears the winds that picked up this afternoon as a weather front moved in a hot spot was fanned into flames and the fire spread,” the fire official said in a news release.

Bend firefighters helped crews from the Deschutes County Department of Solid Waste, which owns and operates the landfill, and Deschutes Recycling, which operates the recycling center, to stop the fire’s immediate spread, Derlacki said.

The county and recycling center workers were remaining on scene through the night and Friday to continue to remove the burned material and put out any further hot spots in the piles.

Derlacki said there are no reported changes to the landfill’s and recycling center’s operating hours on Friday.