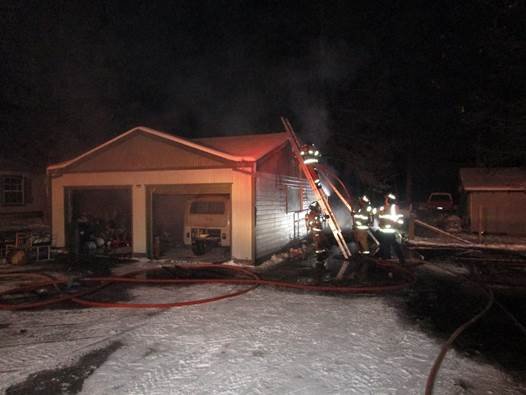 La PINE, Ore. (KTVZ) – Firefighters tackled and knocked down a fire in a detached garage in La Pine’s Ponderosa Pines neighborhood early Wednesday morning, preventing any damage to a nearby home or vehicles.

La Pine Rural Fire Protection District firefighters were dispatched just after 3 a.m. to the garage fire in the 52000 block of Noble Fir, Fire Chief Mike Supkis said. Occupants of the nearby home awakened to the fire’s glow and called 911.

A total of 18 firefighters and three support personnel responded with an engine, two water tenders and several support units.

Crews arrived to find the two-vehicle detached garage with significant flames on the rear, extending into the attic above the garage, Supkis said.

Firefighters were able to make a quick knockdown and put out the fire amid snowy conditions and temperatures in the mid-teens, the fire chief said. The nearby home, several vehicles and small buildings were undamaged.

No injuries were reported.

The fire is believed to have started outside the garage and also involved a firewood pile, Supkis said. The exact cause is still under investigation. The property is insured, he added.