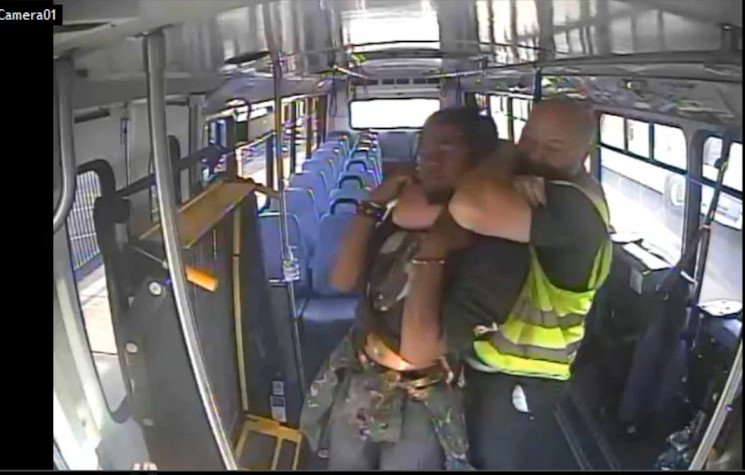 BEND, Ore. (KTVZ) – After a two-day trial and 3 ½ hours of deliberation, a Deschutes County jury found a former Cascades East Transit bus driver guilty Wednesday on two of three charges involving his use of a chokehold on a passenger who refused to get off his bus in August of 2020.

Bus-camera video was released by District Attorney John Hummel when he filed charges shortly after the incident, showing then-CET driver Michael Brinster, 44, wrapping his arm around the neck of 25-year-old passenger Dorian Lee Allstot after yelling “Get off the bus! Those are not shoes!” and “I’m going to drop you now – I will!”

Hummel said Allstot briefly lost consciousness, but a few minutes later got back on the bus, approached Brinster, challenged him to a fight, pulled out a knife when the driver stepped toward him and soon spat in the driver’s face.

The jury on Wednesday convicted Brinster on charges of strangulation and fourth-degree assault, but found him not guilty on a menacing charge. Brinster is due back in court for sentencing on Nov. 18. Hummel said the convictions carry a maximum one-year jail term, but he has not decided what to recommend.

Allstot also was arrested after the altercation for his actions and faced charges of menacing and harassment.

Earlier this year, both men and their attorneys proposed a civil compromise and asked Circuit Judge Alycia Sykora to dismiss the charges in both cases, the DA confirmed. But Hummel, who personally prosecuted the matter, argued against that compromise, and the judge denied the motions to dismiss the two cases, saying some factual matters remained unresolved.

Despite that ruling, Hummel said, charges against the passenger were dismissed, as “Brinster chose not to cooperate with that prosecution.”

In a post-verdict statement Wednesday to NewsChannel 21, Hummel said, “Dorian Allstot is a member of our community and deserved to ride the bus with dignity. I appreciate the jury giving this case the attention it deserved.”