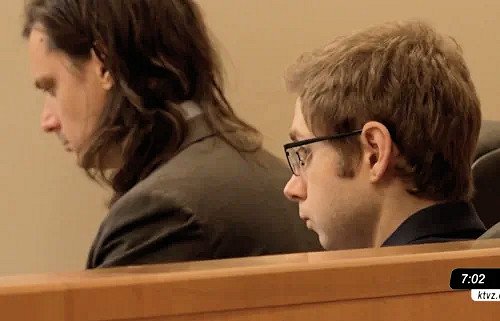 BEND, Ore. (KTVZ) – A Deschutes County jury on Wednesday acquitted Ian Cranston on a second-degree murder charge in the September 2021 shooting death of Barry Washington Jr. but found him guilty of two counts of manslaughter for firing the fatal shot outside a downtown Bend nightclub, an act he said was in self-defense.

On the night of September 19, 2021, Cranston shot and killed Barry Washington on a sidewalk in downtown Bend. Cranston was angry with Washington because Washington had complimented Cranston’s girlfriend.

Lead trial prosecutors for the state were Deputy District Attorneys Michael Swart and Brooks McClain.  They were supported throughout this prosecution by their stellar colleagues in the District Attorney’s Office.

“Today is not a day to rejoice, nor is it a day to celebrate. Today is a day of accountability for Ian Cranston and it is day 424 of Barry Washington’s family and our community mourning his passing.  By all accounts, Barry was a dear friend to many and a wonderful son to Lawanda Roberson. This verdict does not provide Ms. Roberson what she ultimately wants, but hopefully knowing that the residents of Deschutes County valued Barry’s life provides her some comfort moving forward.”

DA John Hummel noted that in Oregon law, it’s the difference between an “intentional” killing and one found to be “reckless with extreme indifference to human life.”

Word of the verdict came around 12:30 p.m. Wednesday after about 6 ½ hours of jury deliberation since Tuesday’s closing arguments.

A member of Washington’s family began to pray as they waited, Roberson beginning to shed tears even before Circuit Judge Beth Bagley entered the courtroom.

A half-dozen sheriff’s deputies were in the courtroom as the small audience waited.

Before the day’s proceedings began, Washington’s mother expressed her discomfort with a certain member of Cranston’s group sitting behind her, then left the courtroom for some time.

At another point, defense attorney Kevin Sali got upset over prosecutor Brooks McClain touching a shared screen, raising his voice in frustration at one point, saying, “Don’t touch it! Sit down!” to which McClain responded, “Don’t tell me to sit down!”

Despite the disruptions, the main focus of the day was on each side’s closing arguments.

Both the prosecution and defense attorneys sought to convince the jury whether Cranston reasonably acted in self-defense in the shooting death of Barry Washington Jr. outside a downtown Bend nightclub on Sept. 19 of last year — or not.

The prosecution started off its final arguments with a goal of persuading jurors that Cranston’s actions were not “objectively reasonable,” meaning the threat from Washington was not imminent, and his response was not proportional to the situation.

Prosecutor Brooks McClain argued that Cranston’s injuries from Washington’s assault did not qualify as serious physical injury. He recounted testimony by Cranston’s friend, Tyler Smith, to support the position that Cranston did not act reasonably.

Mcclain told the jury, “In Tyler Smith’s mind, being a reasonable person, he thought this was a fistfight.” He recalled Smith’s earlier reaction to Cranston’s shooting, when Smith said, “I don’t know what Ian was thinking. I can’t believe this dude just got shot.”

He also replayed Cranston’s earlier testimony on the witness stand, intending to prove that he had intent to kill Washington.

“At this time, as Barry Washington’s turning towards you, do you fire your weapon?” the attorney asked.

Attorney: “Where were you, what part were you trying to fire at?”

Attorney: “Are you aware that there’s a real possibility that may result in death?”

The defense responded later in their closing argument that it shouldn’t take multiple blows to the head before Cranston acted in self-defense.

Sali also told the jury that “all punches are not created equal and that all threats are not perceived equally.”

The defense statements were intended to persuade jurors that Cranston’s state of mind was fear, that he acted to defend his life, and that therefore, his actions were legal.

McClain concluded his closing statement by saying Cranston did not act out of self-defense, but rather pride, having waited 30 seconds and never making an attempt to do anything else to stop Washington.

“Don’t confuse the defendant’s regret with his intent,” he said.

Sali began the defense’s closing statement by asking the jury, “Why did Ian Cranston wait 30 seconds before firing a single shot?”

To which he answered, “Because he thought, he hoped, he would not have to fire (his gun). It was a shot the law absolutely gave him the right to fire.”

The defense attorney argued that Cranston feared for his life.

Facing the jury, Sali described Washington’s larger stature: “Six-foot-two, powerful, muscular, 230-pound man, striking a smaller, leaner man in the face, with all his force. Is it unreasonable to believe that that’s something that could cause serious physical injury?”

In one rebuttal argument to Sali’s claim, prosecutor Swart stated Cranston’s body language showed he didn’t waver after the punches. He also stated that after Cranston shot Washington, he took a long drag from a cigarette he held in his hand during the entire incident, showing his mindset was not one of fear and that Cranston wasn’t as disoriented as he felt Sali was leading the jury to believe.

The prosecution concluded that Cranston did not shoot in self defense and the defense stated the state could not prove that beyond a reasonable doubt.

The jury began its deliberations Tuesday afternoon and was sent home for the day by evening. They resumed their work Wednesday morning.