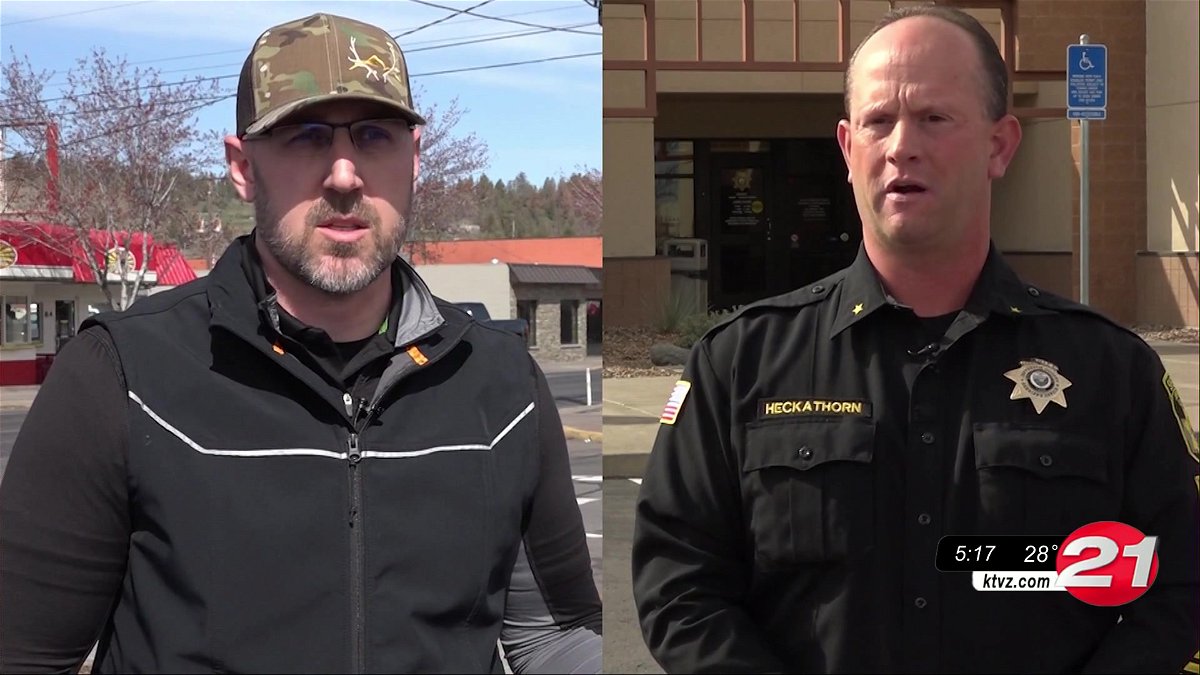 Heckathorn fired back with a release of his own Wednesday afternoon, saying he “was stunned and thoroughly disappointed” by the release from Leriche and Adkins, both of hom he “considered to be my friends and mentors,” and saying he “can easily refute” the claims made by the two men. (His full statement is below.)

First, here’s the full statement issued by Leriche and Adkins:

“After much thought and reflection, we, District Attorney Steve Leriche and Retired Sheriff Jim Adkins, two of the most experienced law enforcement professionals in Jefferson County, have decided to endorse Senior Deputy Jason Pollock for Jefferson County Sheriff.

“Acting Sheriff Heckathorn’s prior service to this county is commendable, but his actions as Acting Sheriff and during this campaign have been the opposite.

“We are disappointed in his decision to remove the Sheriff’s Office from the group of law enforcement professionals that receive tips about the investigation of child pornography cases in this jurisdiction without consulting with community partners, his decision to add a third candidate who is a buddy who doesn’t even want the job to the ballot, and his assertions throughout his campaign that anything negative that a citizen mentioned about the Sheriff’s Office was a result of prior Sheriffs, while anything positive was a result of his work alone.

“That is not accurate. Given these serious concerns about Acting Sheriff Heckathorn’s communication, integrity, and judgment, we cannot support his candidacy.

“Like Acting Sheriff Heckathorn, Senior Deputy Jason Pollock is a dedicated career public servant. He will certainly have things to learn on the administrative side, but he is more than capable of doing so. We are confident in his ability to serve the people of Jefferson County and urge you to vote for him,” the statement concluded.

It’s indeed been a tense campaign between Heckathorn, a 23-year sheriff’s office veteran who previously was undersheriff and Pollock, an 11-year veteran of the office in various roles, including as a detective in child abuse and sex crime cases.

Heckathorn dropped off the paperwork and paid for the filing of third candidate Rick Dupont, saying he asked Dupon to run because the election would have been put off until November with just two candidates.

Leriche told NewsChannel 21 on Wednesday that he had not approached Heckathorn with his concerns, but that he and Adkins had talked and come to a decision based on various factors to back Pollock in the race.

Leriche said he learned in late March that the sheriff’s office had decided that any local tips from the federal Internet Crimes Against Children Task Force regarding child pornography-related IP (Internet) address would go to Oregon State Police, rather than the sheriff’s office.

“No one had approached me about that, and that really concerned me,” he said.

As for Pollock, Leriche said, “I know Jason,” largely from his work as a detective on cases the DA’s office prosecuted. “I know where his heart is,” he said.

Leriche also said he was disappointed how Heckathorn “distanced himself” from Adkins during debates by saying any issues people raised were the previous administration’s fault.

Asked why he didn’t ask Heckathorn about the ICAC decision when he learned of it, or before endorsing his opponent, Leriche said nothing the sheriff could have told him would have convinced him it was the right move.

“I don’t understand how that can be any person’s decision,” Leriche said. “It shocked me. It floored me. I mean, there’s really nothing else to say. I just don’t know why anyone would to that decision.”

However the election turns out, Leriche said, “It would be nice that at the end of the day for the two of them to be gentlemen and to come together to make the strongest Sheriff’s Office possible. That’s what everyone has to hope for. That’s the only right thing to hope for.”

“I was stunned and thoroughly disappointed by the media release issued today by the District Attorney and former Sheriff. Both persons I considered to be my friends and mentors. I’ve worked with both persons for more than twenty years and have both personal and professional relationships with them. Neither person contacted me prior to the release being sent to the media today.

“The retired sheriff was a key supporter of mine and encouraged me to apply for the Sheriff position and I was unanimously appointed as Sheriff by the County Commission in June 2022 and took office July 2022. My relationship and that of my deputies with the DA’s office has always been strong. I’m proud of that partnership and the work we do together serving the citizens of Jefferson County.

“The three issues cited in the media release could have been resolved with direct communication instead of being blindsided in a last minute effort to change the trajectory of an election. The release today is exactly why there is a need to complete the election and to end the divisiveness that has plagued the county for nearly a year.

“I can easily refute each of the three reasons noted in the release these elected and former elected officials used in making an endorsement of a candidate.  The timing of the release was stunning, less than two weeks before an election. Their information was incomplete and inaccurate. I frankly expected both of them to have explored all of the evidence before they weighed in with this last-minute effort to discredit me.

“I stand on my record and my service to Jefferson County.  I continue to be open and welcome to all who want précises details.

“As you can see from the emails, we want the training,” Heckathorn wrote, and “the state wants to help get my detectives trained, and we need to modify policy and obtain equipment, but the process is moving forward in a partnership together.”

He noted the sheriff’s office in early February partnered with ICAC and the Department of Justice on the arrest of a man in Crooked River Ranch on numerous child pornography charges.

Heckathorn told NewsChannel 21 the dispute with the DA over ICAC was “in my opinion a miscommunication by the parties involved.”

“I had a new detective who hadn’t done these cases before,” he said. “We hadn’t had an ICAC case in a very long time.” But he said they didn’t “drop the ball.”

“I don’t have ego when it comes to child abuse cases. I want them properly investigated in a timely manner. … You can’t be wrong on a case like this. … The cases were not never being investigated.”

Now, he said, “I’m going to get this election play out. If I had known (the DA) had concers, I would have reached out months ago.”

And when it’s over, does Heckathorn feel he’ll be able to work with Pollock, whatever the outcome? “Of course,” he said. “Our job is to be partners.”