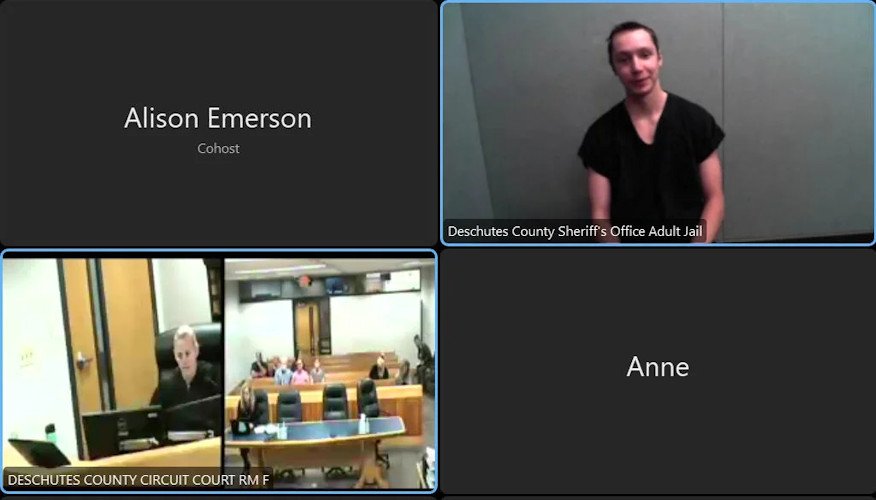 BEND, Ore. (KTVZ) – A Jan. 30 plea-entry date was set Monday for a 22-year-old Redmond man accused of second-degree murder in the killing of a Cloverdale woman late last May, after a disagreement over his ability to aid in his own defense was resolved, at least for the time being.

Deschutes County Circuit Judge Alison Emerson set the plea-entry hearing for Alexander Mark Smith, who is accused of killing Tina Klein-Lewis, 55, outside her home on Cloverdale Road. Her boyfriend found her body in the bucket of a tractor, and the former OSU (Corvallis) student was arrested three days later on Jordan Road.

Smith also faces other charges in separate cases, including two mid-May break-ins at his parents’ home. Family members told NewsChannel 21 of Smith’s mental health challenges and their struggles to get him needed help.

A psychiatric evaluation earlier this year, performed for Smith’s defense attorneys, found he was unable to aid and assist in his own defense, but prosecutors said they believed there were “some holes” in that evaluation and had their own evaluation conducted, which found Smith is able to aid in that defense – key for the criminal case to proceed.

A three-hour hearing had been scheduled for Monday for Emerson to hear the conflicting aid-and-assist findings. But late last week, Smith’s attorney filed a motion dropping their objections and agreed to proceed.

At Monday’s brief hearing to set a plea date, defense attorney Christopher Morgan said they are “not contesting that finding (of ability to aid and assist) at this point,” but added, “We would reserve the right to raise further aid0and-assist concerns in the future.”

That also restarts the so-called “60-day clock” that assures defendants the right to a speedy trial, so Emerson asked Smith two questions, first if he understood that right, and then if he was agreeable to waiving it. “Yes, ma’am,” he replied twice on a video hookup from the Deschutes County Jail.

The defense asked for a plea hearing date about 45 days out, as Morgan said they are “still conducting an investigation in these matters,” so the Jan. 30 date was chosen.

Judge Emerson told Smith and the attorneys, “I’ll see you back then.”

The post Jan. 30 plea date set for Redmond man accused of murder in May killing of Cloverdale woman appeared first on KTVZ.