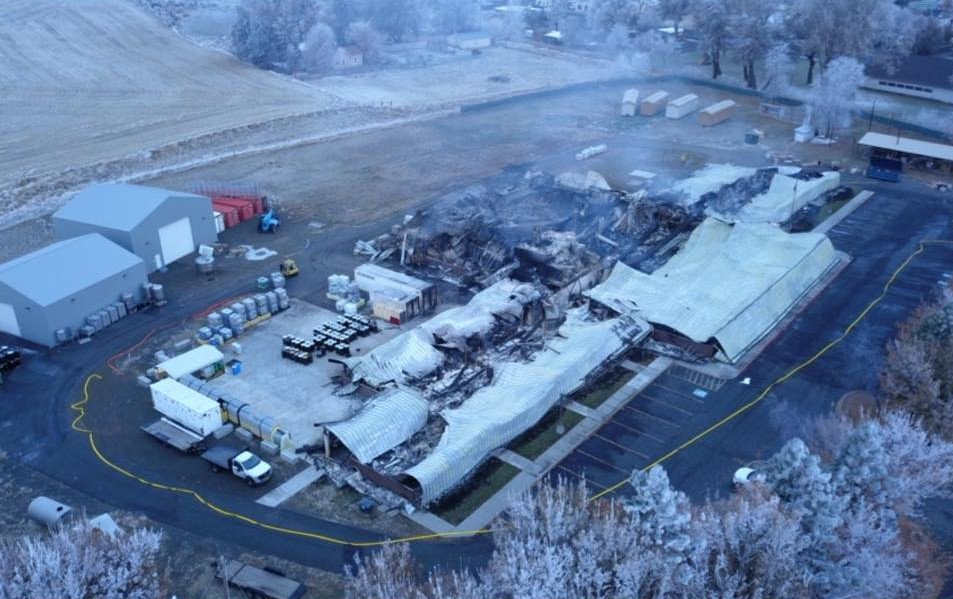 The facility makes products such as hemp oils, lip balms and salves, the official said.

“Initially, there was a first explosion in one of their side rooms, the extraction room” at the facility, roughly 80-by-100 feet in size, located in the former Grass Valley School, Pursley-Haner said.

Officials decided to evacuate Grass Valley, a city of about 150, due to the chemicals kept on site, Pursley-Hander said, also confirming there had been subsequent “mini-explosions” from the toxic chemicals stored on site. The evacuation was lifted late Monday morning and officials sent an alert that it was safe to return home.

Sherman County sheriff’s deputies said the evacuation was “due to a large volume of combustible chemicals and the possibility of a large explosion.”

“We’re erring on the side of caution,” Pursley-Haner said. She said around in the early evening that officials hoped the situation was improved enough that residents could return home by around midnight. But sheriff’s officials later said the evacuation would continue through the night, with the situation to be reassessed Monday morning.

The winds shifted Sunday night, she said, and people in the area could smell the chemicals.

Firefighters initially worked to put out the fire, but backed off to a defensive status, letting the fire burn. “It was too dangerous for us to go in any more, due to the chemicals,” Pursley-Haner said.

The building was called a total loss. The cause of the explosion and fire was under investigation.

“It could have been way worse,” Pursley-Haner said, as a much smaller weekend crew was working at the plant. “On a weekday, there would have been double, triple the number” of workers there, she explained.

Gresham and Hermiston hazardous-materials crews were called to the scene. Pursley-Haner said. Oregon DEQ and the Office of the State Fire Marshal will be there on Monday to monitor and assess conditions, as well as help investigate what happened.

A total of 15 displaced people were staying at an American Red Cross shelter at the Sherman County School in nearby Moro.

An 11-mile stretch of Highway 97 between Moro and south of Grass Valley was closed for several hours but reopened around 7:30 p.m. ODOT advised motorists that due to the fire and thick freezing fog in the area, they should continue to “use caution and watch for emergency responders.”

Grass Valley is about 110 miles north of Bend.