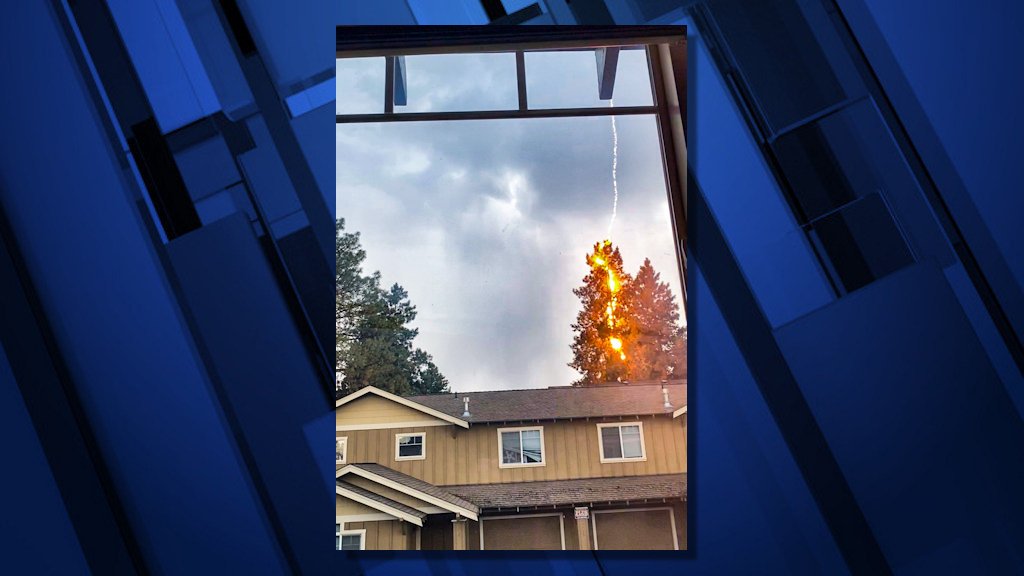 BEND, Ore. (KTVZ) – Intense thunderstorms rumbled through Central Oregon Tuesday afternoon, hitting the region with hundreds of lightning strikes that had fire crews from numerous agencies scrambling to catch dozens of fires ignited around the area, stopping most at small sizes.

As of early Tuesday evening, all but one of the blazes was kept to less than a quarter-acre. The exception was the Doghouse Gulch Fire (Incident 626), which broke out near the South Fork of the John Day River and had burned an estimated 15 acres.

The National Weather Service issued a Red Flag (fire weather) Warning that was in effect until 9 p.m.

The NWS in Pendleton also issued a special weather statement around 12:40 p.m., warning of a string of strong thunderstorms extending from east of Sunriver to east of Millican, moving north at 50 mph and packing winds gusting to 55 mph. Forecasters also reported another strong thunderstorm around 1:1 5p.m. near Tumalo, quickly moving north.

Jakki Carter, who works remotely from her home on Britta Street in northwest Bend, saw some flashes of lightning outside her home office window and caught on camera one strike that ignited a fire down a tall tree nearby.

It was one of many trees struck by lightning bolts around the region Tuesday afternoon as fire crews rushed to put them out. Some buildings apparently were hit as well.

Due to heavy rain, police said the Greenwood Avenue and Third Street underpasses were flooding and urged motorists to avoid the areas for a time.

About 500 Pacific Power customers were without service at mid-afternoon, down to only about a dozen by evening.

Other utilities reported outages as well. Redmond-based Central Electric Cooperative had members affected in the Tumalo area, southeast Bend and the Marks Creek/Ochoco Ranger Station area. About 480 members were affected, said Brent ten Pas, CEC’s director of member and customer relations. About 60 were without power Tuesday evening, according to an outage map.

The utility urged people to not approached downed lines or debris in the lines, and instead keep a safe distance and call 800-752-5935 to report an outage, debris on a line or other issues.

The heavy rain also brought mudslides in southeast Oregon that closed a 13-mile stretch of state Highway 140 between Lakeview and Adel late Tuesday.

It had already been a busy day, with more than a dozen smoke reports checked earlier by Central Oregon fire crews around the region.

After a stormy, lightning-filled night in the Bend area, a lightning strike on a transmission line east of town Tuesday morning knocked out power to about 34,000 Pacific Power customers for up to almost two hours.

At its height, 34,000 customers were without service, Hanson said, but “crews got to work right away” and restored power to about half of those affected within a half-hour. All were restored by about 8:30 a.m., although the outage map showed a few small scattered lingering outages affecting only about a dozen customers.