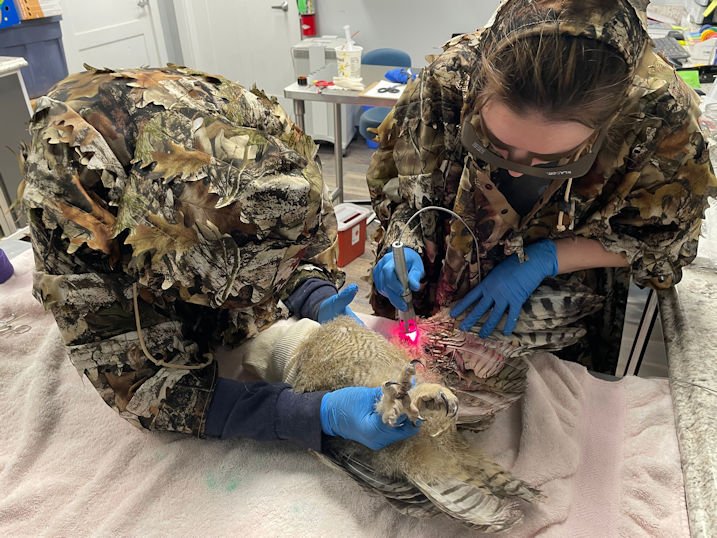 BEND, Ore. (KTVZ) — Last week, Bend wildlife hospital and conservation center Think Wild received a call from the Bear Creek Solar Center, just a half mile away. While inspecting the solar field, a worker noticed a large bird struggling to free itself from the barbed wire fence surrounding the property.

The worker immediately called Think Wild, and a staff member and volunteer responded with personal protective equipment and wire cutters. They discovered the entangled bird was a fledgling great horned owl, likely no more than 4 weeks old.

Although Think Wild’s responders freed the owl, a piece of wire remained deeply lodged in the left wing, requiring immediate transport back to the wildlife hospital.

Upon intake at Think Wild and careful removal of the piece of barbed wire, staff assessed the extent of the injuries. In addition to the puncture wound from the wire, most of the primary and secondary feathers were also bent and broken due to the owl’s struggle to get free. These feathers are essential to flight and take time to heal and regrow.

“The owl sustained multiple puncture wounds from the barbs, as well as trauma to the soft tissue of the wing, but luckily no fractures,” said Pauline Hice, Think Wild’s Director of Wildlife Rehabilitation.

Think Wild staff and volunteers are treating the fledgling owl with antibiotics, wing stabilization, physical therapy, and laser therapy, which reduces swelling and pain and helps to speed the healing process. The owl was also hand-fed using a hand puppet of an adult owl to prevent imprinting on humans.

“We’re expecting to continue treatment and rehabilitation of the owl for another month and are optimistic of a full recovery and release,” said Hice.

“This is the first barbed wire-entangled bird since I started earlier in the summer that hasn’t had to be humanely euthanized, so this is a surprisingly good prognosis,” says Molly Honea, Think Wild’s Wildlife Hotline Coordinator and one of the on-site responders to the call.

Every year, Think Wild receives numerous calls for owls, falcons, hawks, songbirds, and mammals that have become entangled in barbed wire fencing. Many struggle there until they die. Others are rescued and brought into the hospital, but their injuries are usually so severe that euthanasia is the only alternative.

In fact, only a few days before this most recent rescue, another great horned owl had to be humanely euthanized after a barbed wire entanglement.

Fortunately, there is a simple solution to prevent these incidents – installing wildlife-safe alternatives to barbed wire fences. You can read about some alternative fencing options and wildlife considerations on Think Wild’s website.

The Deschutes County Juvenile Community Justice division will also remove and recycle nonfunctional barbed wire that has fallen to the ground, has been partially buried, or is no longer used to fence in livestock at no cost. For more information on this program, contact Sam Bachman at (541) 322-7650.

Think Wild is a 501(c)3 non-profit organization located in Bend, Oregon. Our mission is to inspire the High Desert community to care for and protect native wildlife through rescue and rehabilitation, outreach and education, and conservation. We provide veterinary treatment and care at the wildlife hospital, staffed by expert wildlife rehabilitation staff, animal husbandry volunteers, and rotating veterinarians. Wildlife conflicts or injuries can be reported through our Wildlife Hotline at (541) 241-8680 seven days a week from 8 AM to 5 PM. Visit us online at thinkwildco.org, or on Instagram, Facebook, and Twitter @thinkwildco.