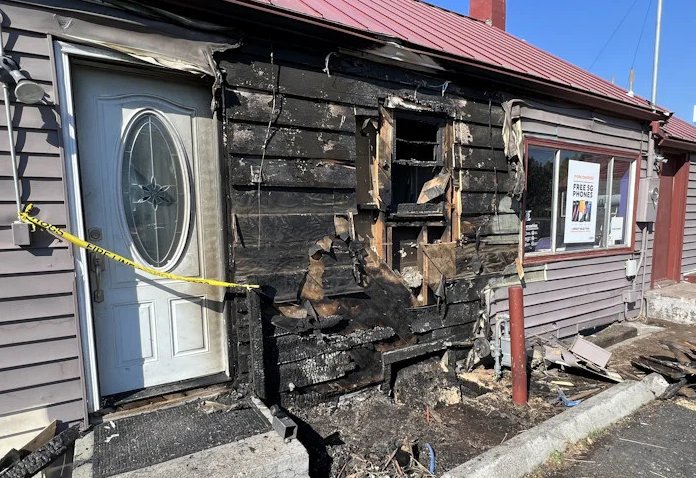 BEND, Ore. (KTVZ) – A 47-year-old homeless Bend resident was arrested Tuesday on two counts of arson for a fire last Saturday that damaged a Northeast Third Street wireless business and one earlier this year that burned a dumpster behind a nearby restaurant, police said.

The early Saturday morning fire caused an estimated $25,000 damage to the exterior of Spiked Wireless at 1036 NE Third Street, and police and fire investigators soon determined it was intentionally caused.

Investigators canvassed the neighborhood and found video evidence that implicated the suspect. An officer patrolling Tuesday near Northeast Second Street and Irving Avenue spotted the suspect and arrested him on a charge of second-degree arson, Lieutenant Brian Beekman said.

Based on additional evidence police developed, Tyler was charged with another county of second-degree arson, accused of setting a dumpster on fire last Feb. 11 on a commercial property at 1106 NE Third Street, behind the Taco Bell restaurant, Beekman said.

Saturday’s fire came just a few days after another arson fire less than a mile away heavily damaged a home up for sale at 575 NE Olney Avenue early last Tuesday morning, causing an estimated $200,000 in damage.

While the suspect in Saturday’s and February’s fire is not charged in last week’s arson, Beekman acknowledged to NewsChannel 22 that “the timing and location are highly suspicious.”

“We are not ruling him out of being involved in additional fires and are continuing to gather evidence,” the lieutenant said. “We will charge each offense that we have enough to support.”