‘He helped me stand on so many mountains’: Hundreds come together to celebrate the lives of Bend twin brothers 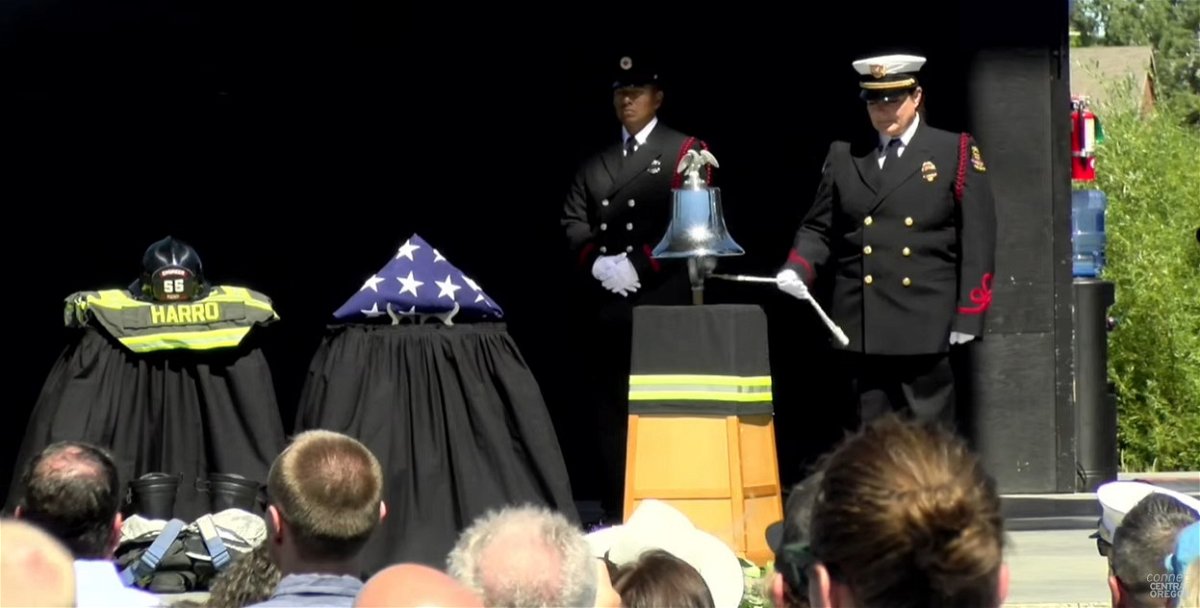 BEND, Ore. (KTVZ) – Hundreds gathered at Hayden Homes Amphitheater Sunday morning to honor, remember, mourn and share funny, sweet and touching memories and speak of the lasting impacts of two Bend twin brothers – one a firefighter – who lost their lives in the Idaho crash of their small plane nearly two weeks ago.

As befitting the loss of a member of the firefighter family, a procession of bagpipers and drummers began and ended the celebration of life on a sunny, pleasant late-summer Sunday.

In between came so many stories of firefighter Engineer Daniel Harro and his twin brother, Mark – of their outdoor adventures, drive to improve their skills, committed relationships and passionate, devoted ways — that even those who didn’t know them, or know them well, couldn’t help but leave impressed by the impact they had on so many.

The Harro brothers, 38, were born in Soldotna, Alaska – Mark “older by a few minutes,” related Bend Fire Chief Todd Riley, who became personal friends with Daniel and his wife, Elisif.

When the crowd was asked who among them felt the brothers were a close friend, few failed to raise their hand. “That is what I’d call impact,” Riley said.

“Daniel did not take life for granted,” he said of the man who was due for promotion to captain in December, sharing how despite a sarcastic sense of humor, Daniel would “see the positive in every situation.”

Due to time constraints, Brad Carver, who ran the bike shop in Soldotna, shared just a bit of a few of the stories he prefers to tell at length about the twins’ young shenanigans and continued friendship. He said he’s about to turn in the keys to the bike shop, after 30 years, and will “try to life the life Mark and Daniel lived. As Daniel would say, ‘Peace out.’”

Mark’s wife, Kelly, spoke of their love and lives as best friends over a dozen years, since that day he was “asking me to be his camping buddy for life.” She said the art they made together was more successful than what they did on their own: “Our skills complemented each other – Mark built, I designed.”

One of the many friends on hand said the brothers were “likely the best friends you’ll ever have in your life – adventuresome, wild boys who grow up into still wild, but wonderful men.”

Tim Reardon of Bend Fire said Daniel was on the Special Operations Rescue Team, “always looking for ways to make us better.” And he, like many, spoke of his charismatic personality and “dry, quirky sense of humor. His laugh was infectious, and he made coming to work fun.”

Not to mention all the times he and others would join the brothers for skate skiing from Mt. Bachelor or Meissner Sno-Park, as they came down the hill whooping it up, often literally, Daniel calling each day’s adventures the “best day ever.”

Several shared their favorite “Harro-isms,” such as Daniel’s simple answer, when asked how great a day it was: “All-time.”

Daniel’s wife, Elisif, smiled widely through the tears as she spoke of how “Daniel exuded joy. He left his mark for positivity and enthusiasm, ‘stoke level.’ It was rare he wouldn’t call each day ‘the best day ever,’ and mean it wholeheartedly.”

“People gravitated toward Daniel,” she said. “One reason was that he was always so present and genuine. He made you feel that you mattered. I can’t say how many people have come up to me and said he was like a brother to them.”

While Daniel “never lost the ability to exhibit child-like playfulness,” Elisif said he also “repaired every neighbor’s appliances” and loved to read off all the bargains from the latest WinCo shopping run.

She also recalled how he’d say: “That hill’s not gonna climb himself.” And she told how the two of them flew into Idaho’s backcountry for a special camping trip.

“He helped me stand on so many mountains,” Elisif Harro said. “We packed so many lifetimes into one, that ended far too soon. Daniel didn’t wait for life to happen. He had dreams, and he made them come true.”

She also recalled – first noting how some might think it macabre to bring it up, though she clearly did not – that one of the things he’d say is: “Sleep when you’re dead.”

“He didn’t waste one second of his precious life,” Elisif said, still smiling through the tears.

Then came a slide show of family photos, others with fellow firefighters, the many outdoor adventures – and yes, one of the two smiling brothers flying in that Husky plane, joined by Daniel’s happy dog, Cinder, who survived the crash that claimed them.

The traditional fire service ceremony ended the event – the symbolic ringing of the “end of duty” service bell, the flags presented to the families and the bagpipers playing – of course – Amazing Grace.

The post ‘He helped me stand on so many mountains’: Hundreds come together to celebrate the lives of Bend twin brothers appeared first on KTVZ.