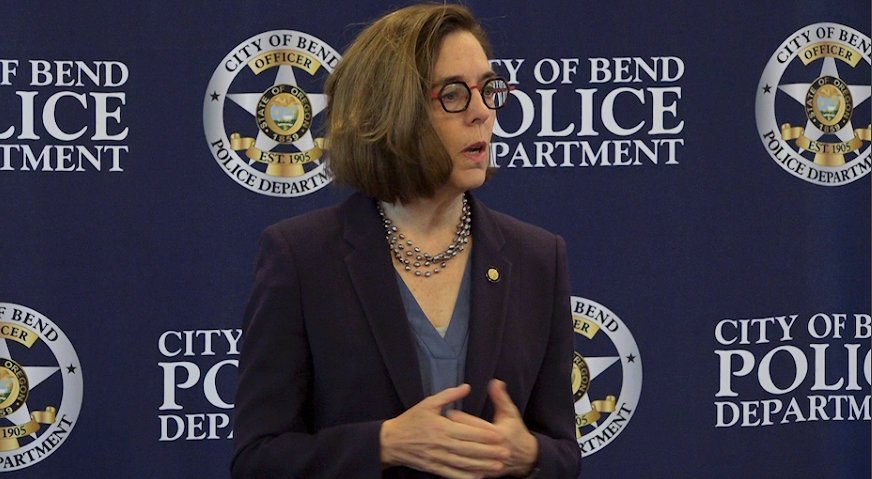 BEND, Ore. (KTVZ) — Five days have passed since a gunman opened fire at the Bend Eastside Safeway, killing two men then himself, shaking our small Central Oregon community. Gov. Kate Brown paid a visit to Bend on Friday to meet privately with the families of the two men fatally shot, as well as with police and fire department first responders who rushed to the scene, thanking them for their quick, professional response.

After the private meeting at the Bend Fire Station by Pilot Butte, Brown spoke with reporters.

“I want you to know that the people of Oregon, the entire state of Oregon, is holding your hearts at this time,” Gov. Brown said.

She praised local efforts to help community members since the shooting, to support those in need, and heal from the tragedy. Brown also publicly expressed her gratitude to the police officers and first responders who quickly responded to Sunday’s shooting, highlighting their bravery.

“It’s folks like these, as well as the actions of the victims, that make me so incredibly proud to be an Oregonian,” Gov. Brown said. “But these first responders showed enormous courage and strength given the circumstances.”

“And frankly — they had the guts,” she added.

“It means a lot to our community to have the Governor and just people around the state who’ve been so supportive coming in and seeing us,” Miller said. “And letting us know what it means to them, that we responded the way we did.”

Brown also spoke in favor of and urged Oregonians to vote for Measure 114, a gun-control measure on Oregon’s fall ballot, while stressing the importance of addressing and ending gun violence across Oregon, and America.

“Everyone has the right to be safe from gun violence,” she said. “Every Oregonian should be able to go to grocery stores, to school, and to places of worship without fear of gun violence.”