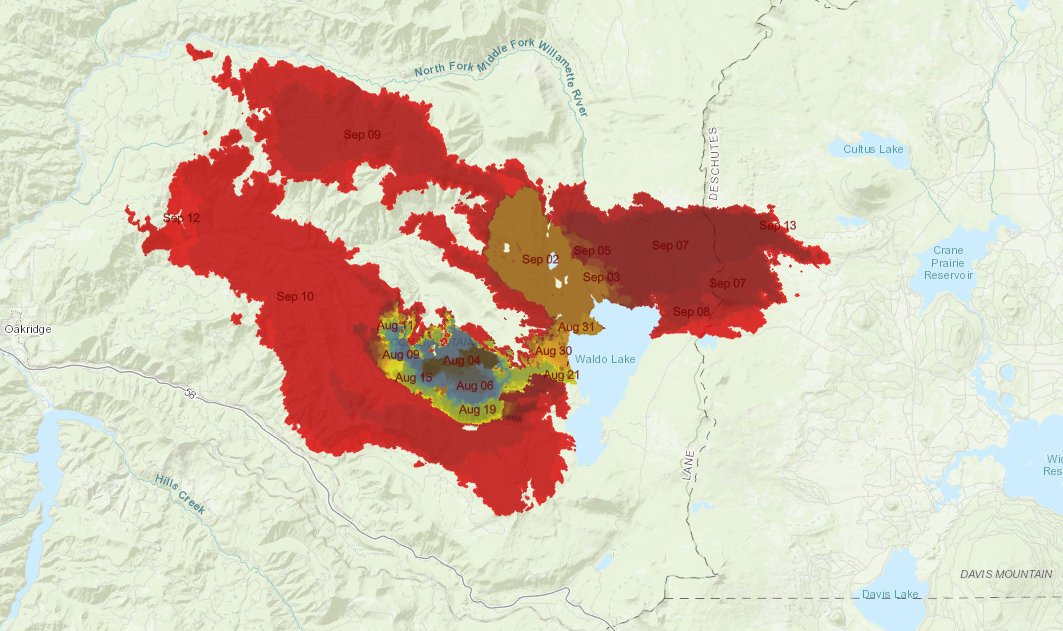 SALEM, Ore. (KTVZ) — As the Cedar Creek firefighting ranks swelled past 1,800, Gov. Kate Brown said Wednesday she’s asked President Biden to issue a federal emergency declaration for the state due to extreme risk of significant wildfires, with several burning around the state.

Here is her statement about the request, made under the Robert T. Stafford Disaster Relief and Emergency Assistance Act:

“Last week, as Oregon faced forecasted high winds, sustained hot and dry conditions, and the potential for lightning — and with 168,000 acres burning across the state at the time — Oregonians braced for increased and worsening fires. State firefighting teams and agencies, along with local partners and resources brought in from California and Washington through the Emergency Management Assistance Compact, mobilized to prepare for a swift response and to protect lives, communities, and our natural resources.

“Thanks to science and data, we know enough in the days ahead of anticipated weather and fire patterns — just like states that prepare for hurricanes — that it is imperative to communicate with the public, pre-position resources for our fire response, and employ preventive measures, such as public safety power shut-offs. All of these efforts reflect a modernized approach to meeting the needs of fighting the fires of this century; they are proactive measures that we can take to protect communities and save lives.

“The request I made for a federal disaster declaration is critical to helping bolster our state’s response, and it presents an opportunity for Oregon to partner with the Federal Emergency Management Agency (FEMA) to bridge the gaps we know exist as we work hard to protect our communities. We still have several weeks of peak fire season ahead of us, five large active fires, and 274,000 acres burning statewide. If granted, Oregon would be the first state ever to receive such a declaration for wildfire response — but unfortunately, certainly not the last to need this important assistance.

“I am incredibly grateful for the strong partnership we have with the Biden-Harris administration and with FEMA, with whom we have worked over the past several years on various emergencies. I urge their earnest consideration of my request so that, together, we can protect Oregonians and our communities, and serve as a model of federal support for states facing the ongoing threat of wildfires.”

As of Wednesday morning, 1,824 firefighters were battling the Cedar Creek Fire, which has dramatically slowed its growth, from the weekend, reported at 92,525 acres. The more than 6-week-old fire was rolled back to zero containment when hot, dry and windy weather pushed it past containment lines.

Fire officials say the area has from the start been presenting serious challenges for safety due to its topography, with steep slopes and valleys that are hard to access.

If crews go into an area, it’s imperative that they can also come out quickly and safely, if they become injured or are in a threatening situation, officials said.

Crews are using trip torches to work on the containment lines, as well as drones and a small amounts of fire retardant.

Cedar Creek Fire Public Information Officer Bud Sexton says the fire also is near a wilderness area and they also work to maintain the wilderness integrity.

Kelsey McGee spoke with Sexton to learn of the challenges this fire presents. Her report will be on NewsChannel 21 at Five.

A fire progression animated map can be viewed at: https://nifc.maps.arcgis.com/apps/instant/slider/index.html?appid=43cb3c38e2a941c38349a29125fc6c8d

Current Situation: The Lane County Sheriff’s Office, in consultation with the fire team, reduced the evacuation to Level 1 (Be Ready) for the City of Westfir and Oakridge between Laurel Butte and the Middle Fork Willamette River west of Fish Hatchery Road. Other areas that were reduced to Level 2 (Be Set) on Monday remain at Level 2, including: High Prairie area, Hills Creek Reservoir area, and Oakridge north of Laurel Butte Road and east of Fish Hatchery Road. The Deschutes National Forest issued an expanded closure Tuesday to include areas of the forest where fire crews are working. Crews are operating heavy equipment along the Cascade Lakes Highway corridor and along forest roads. Residents are asked to be aware of increased fire-related traffic, drive safely, and obey all road closures and traffic safety laws.

The fire remains active, burning with low to moderate intensity. Although fire behavior has calmed considerably since last weekend, fuels are still dry and combustible. Smoke will continue to linger through the week, impacting air quality. Smoke is primarily impacting communities on the east side of the fire, particularly La Pine, Crescent Lake, Sun River, and Bend.

West Zone Operations: The west zone continues to focus on the protecting the communities of Oakridge and Westfir and the Highway 58 corridor. Crews took advantage of fire behavior that was moderated by higher humidity throughout the day. Firefighters continued improving Forest Road 19 as well as other road systems to use as containment lines.

On the southern edge, the fire continued to back down slopes from Bunchgrass Ridge toward the rail line. A hotshot crew connected handline along the southern boundary west of Fuji Mountain and implemented firing operations along that fireline to reduce ground vegetation in advance of the main fire.

Structural crews continued to perform tactical patrols near Odell Lake; Wednesday they will support burn operations near Highway 58 to remove fuels between the fire’s edge and the highway. Low visibility limited the ability to use helicopters and airplanes for most of the day. Structural firefighters continued their work in the High Prairie area. The night shift worked to support burn operations when conditions were favorable, and Wednesday’s shift will focus on supporting mop up work and performing tactical patrols. Today, crews supported by heavy equipment will keep thinning and chipping vegetation to improve roads for use as containment lines.

Work along the roads includes removing snags that may pose a threat to firefighters. As conditions allow, firefighters will use aerial and hand ignition to improve effectiveness of containment lines. Firefighters are reducing vegetation and improving roads between containment lines and the active fire to be used as a way to slow the fire and reduce intensity as it approaches the control features.

East Zone Operations: Junction camp was established Tuesday near the intersection of Oregon State Routes 429 and 58. This camp positions 210 firefighters closer to their work in the Odell Lake area. Two Type 2 crews and hot shots are assessing and protecting structures around Odell Lake, including Golden Lake Campground, Willamette Pass, and the Diamond Peak area. Protection measures include clearing brush from around structures and laying hose and sprinklers. Road prep was started and will continue over the next few days on Forest Road 5897 from State Route 58 to Fuji Mountain Trail. Hand crews are also working to join Forest Roads 4660 and 4668. Hand crews have also been working Forest Road 700 near Brown Mountain, south of Crane Prairie Reservoir. Heavy equipment continues along the Cascade Lakes Highway, creating a 100-foot fire break on the west side of the road. To the north, structure protection continues around Lava Lake.

Weather/Fire Behavior: Weather conditions are expected to stay moderate with light west winds and cooler seasonal temperatures in the 60s. Fuel moisture levels are at a point where grasses are not easily carrying fire but larger sticks and limbs that are about wrist sized are actively burning. The southern edge of the fire is expected to continue backing down toward containment lines and may reach the Eagle Creek area in the next day or two. Some torching and spotting are expected, but most activity should be creeping and smoldering.