From alien spacecraft to lava, Pilot Butte visitors guess what’s in mysterious bunker at the summit 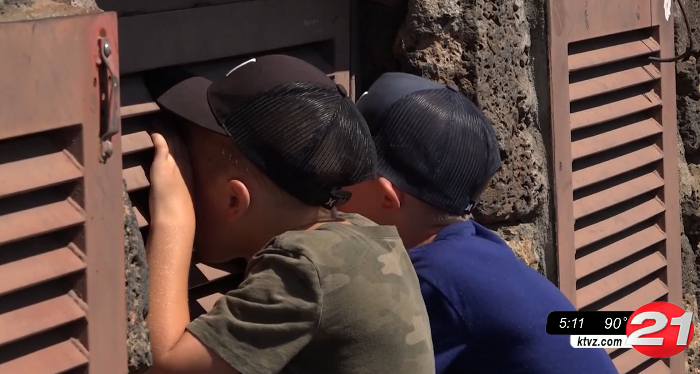 We have the answer! (Don’t get your hopes up;-)

BEND, Ore. (KTVZ) — Most people in Central Oregon have been to or are familiar with Bend’s Pilot Butte.

But there’s a small mystery waiting at the top, and state Park Manager Joe Wanamaker said Wednesday that visitors to the landmark are starting to ask questions.

“You know, I haven’t really heard that much about it, but all of a sudden recently, even though it’s been here almost 20 years, people seem to be noticing it,” Wanamaker said.

A lot of people have been asking what’s in that little room or bunker on the top of Pilot Butte — and why is it buzzing?

“A lot of rumors are going around out there,” Wanamaker said.

Hayley Clark lives in Bend and is curious.

“I walk the butte every day, and every time I come in here, it’s always buzzing, so I never know what’s going on in there,” Clark said.

A recent “I Love Bend” Facebook post sparked online conversation, leading to some interesting theories as to what’s behind the grates and door.

“I had somebody ask me recently whether it vents volcanic gas,” Wanamaker said. “People are speculating whether there’s an alien spacecraft in there that crashed into the butte.”

Some everyday hikers are thinking along the same lines.

“I don’t believe the lava thing, but the alien thing could be it,” Clark said.

“We see like air vents and like wood, metal and all kinds of stuff,” the Harris brothers said (and repeated) while peering into the grates. “Bring water from the Deschutes lake and make it keep the lava cool, like turn to rock.”

Tessa Baldwin has been visiting Bend since she was a child, and has her own theories.

“Sounds like a compressor, so I’ve got to say controls,” Baldwin said.

Willow Huffine, a St. Charles psychologist, has her realistic theories, and her not-so-realistic ones.

Clark joked about another theory.

“Or maybe underground people,” Clark said. “They’re the ones that actually run Bend.”

However, the actual surprise behind the door is much less exciting.

“I would rather be disappointed,” Clark said, wanting to know the answer. “Yeah, I want to know what it is.”

But Huffine would rather keep it an unknown.

The so-called “bunker” is home to two rooms.

One full of equipment for a cell tower on the butte, the other with air conditioners, keeping the equipment cool, the park manager said.

“I’m sorry to disappoint people, and that it’s kind of a boring answer, but that’s really all it is,” Wanamaker said.

The post From alien spacecraft to lava, Pilot Butte visitors guess what’s in mysterious bunker at the summit appeared first on KTVZ.