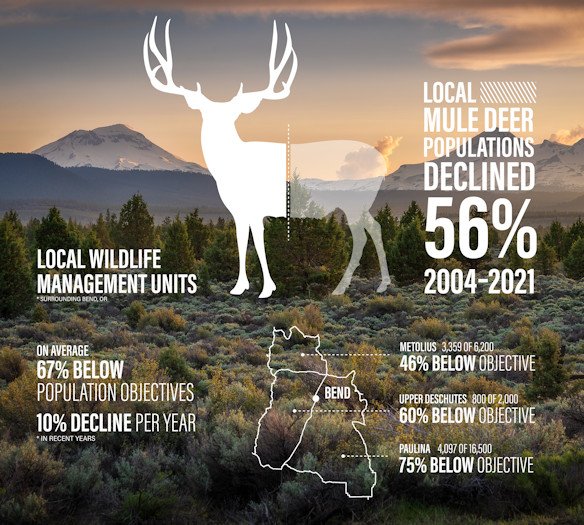 The public can visit the following links to view maps of the closure areas:

Winter range is habitat deer and elk migrate to in order to find more favorable living conditions during the winter. Winter range is found predominantly in lower elevations of Central Oregon and is extremely important to elk and mule deer survival.

Winter ranges usually have minimal amounts of snow cover and provide vegetation for forage, hiding cover, and protection from the weather. In Oregon, elk and mule deer migrate, often long distances, to lower elevations to escape or minimize exposure to snow cover.

Local mule deer populations have declined 56% between 2004 and 2021. Human disturbance of deer and elk during the winter can cause the animals to flee, which expends energy from the reserves they’re relying on to survive through winter and to successfully provide for young in the spring.

By respecting winter range closures, the public can reduce impacts to deer and elk, helping to sustain existing populations into the future. Improving habitat quality for deer can preserve the functionality of traditional migratory routes and reduce impacts with nuisance deer in town resulting in more healthy and productive deer populations, the Forest Service said

The public can learn more about the importance of winter range here: https://www.fs.usda.gov/detailfull/deschutes/home/?cid=fseprd1075797&width=full