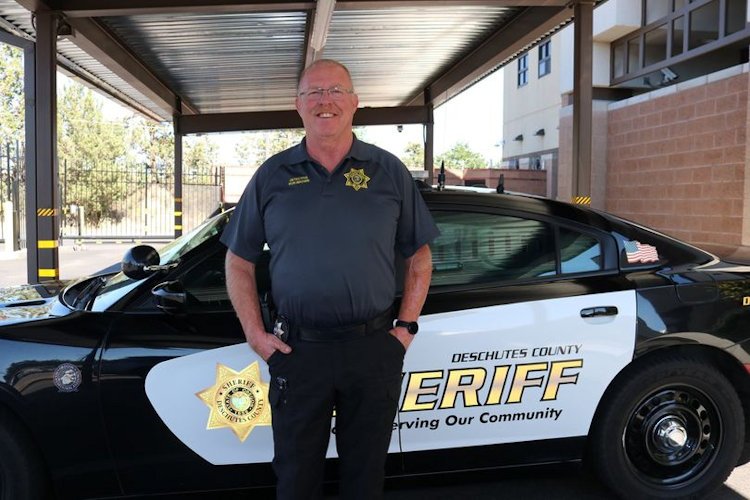 OSP investigation leads to charges against Brown, who ‘retired’ while on administrative leave

BEND, Ore. (KTVZ) – Deschutes County District Attorney John Hummel filed official misconduct and other charges Monday against a former long-time sheriff’s deputy and detective who last year allegedly transferred intimate photos from a dead man’s phone to his own and later engaged in an offensive encounter with the man’s girlfriend.

After what Hummel termed “a top-notch and thorough investigation conducted by the Oregon State Police,” Ron Brown, 58, was charged with four Class A misdemeanors: three counts of first-degree official misconduct and one count of unlawful dissemination of an intimate image.

Hummel said prosecutors allege Brown was called to the scene of a death on Sept. 28 of last year and spoke with the dead man’s girlfriend, who asked him to delete intimate photos of her and her boyfriend from her boyfriend’s phone, so the man’s family wouldn’t see then. Rather than delete them, he allegedly transferred the photos and images to his phone, resulting in the first official misconduct charge.

About two months later, on Dec. 30, the woman was being evicted from an area motel, and management denied her access to some personal items in the room, Hummel said. She called Brown for help, knowing him from the investigation of her boyfriend’s death and trusting him.

“Brown, eager to ‘help,’ went to the motel, represented to motel management that he was there on law enforcement business, and retrieved the victim’s belongings,” Hummel said, a misrepresentation that brought the second official misconduct charge.

After retrieving the victim’s items from the motel under false pretenses, the DA said Brown called her and asked her to meet in a restaurant parking lot. When she arrived, Hummel said he told her to get in his car – and when she did, Brown allegedly was watching pornography on his phone, was aroused and “was not able to control his body movements,” Hummel said in a news release. That led to the third official misconduct charge.

“Shame on Ron Brown,” Hummel said in a statement at the conclusion of his news release. “Our community entrusted him with a badge, handcuffs, and a gun on the condition that he would use the authority we granted him to keep our community safe.

“Instead, the evidence shows he weaponized the trust we put in him by taking advantage of someone who was particularly vulnerable due to her grief from losing her boyfriend.  Additionally, Brown’s actions besmirch the reputation of the hundreds of excellent law enforcement officers in our community.

“Brown of course is presumed innocent, and in fact is innocent, unless and until the state proves his guilt beyond a reasonable doubt,” Hummel said. “That having been said, on behalf of the woman who was victimized in this case, and all the good cops in Deschutes County, my team and I will fight for justice to be done.”

The sheriff’s office issued a statement after the charges were filed Monday, saying that “after learning of the allegations against former Deputy Ron Brown, Sheriff Nelson directed that Mr. Brown be immediately placed on administrative leave” on Jan. 12 of this year.

“Mr. Brown’s badge, gun and credentials were taken at that time to protect the public,” the statement from Captain Paul Garrison continued. “A criminal investigation was initiated by the Oregon State Police, and the Sheriff’s Office opened an internal affairs investigation,”

“Mr. Brown retired during the internal affairs investigation and is no longer associated with the Sheriff’s Office,” the agency said.

In a 2020 Facebook posting, part of a series on “getting to know your DCSO,” the sheriff’s office said Brown had been with the agency for over 20 years, starting out as a reserve deputy and working in both corrections and patrol before his role as a criminal detective.

“He says the most enjoyable thing about his job is that he gets to help people,” the posting said, noting he decided to get into law enforcement after taking a student law class when he was 16.

“Always treat everyone the way you would want your family to be treated and do the right thing,” Brown was quoted as saying.