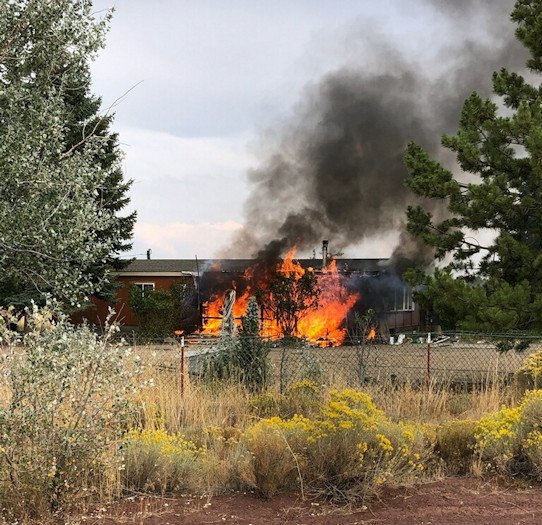 TUMALO, Ore. (KTVZ) – A fire destroyed a Tumalo-area manufactured home late Saturday afternoon, and the American Red Cross was called in to assist the renter, who did not have insurance, officials said.

Crews arrived to find a fire burning in a 1,500-square-foot manufactured home built in 1979, she said.

No one was home at the time of the fire, she said.

While most of the flames were knocked down quickly, crews were challenged in finishing the task by a large quantity of combustible materials in and around the home, Kettering noted.

Bend Fire was assisted by a water tender from the Cloverdale Fire District, and the last units departed around 7:30 p.m.

The renter, who lived alone, did not have insurance and was assisted by a disaster response team from the Red Cross, as both the home and contents were a total loss. Losses were estimated at $80,000 to the structure and $20,000 for the contents.

Three cats were missing, Kettering said, but may have been able to get outside through a cat door.

An investigation determined the fire originated outside the home, in the front deck are, then extended inside.

“The exact cause of the fire could not be determined but is accidental in nature,” Kettering said.

“Bend Fire & Rescue would like to encourage anyone who is renting or leasing their residence to have renter’s insurance,” Kettering said in a news release. “The homeowner’s insurance policy typically does not cover the possessions of the tenant.

“Renter’s insurance is very inexpensive and may cover not only belongings, but living expenses incurred if your home becomes uninhabitable,” she added. “For more information on renter’s insurance, visit the state of Oregon’s page at https://dfr.oregon.gov/insure/home/Pages/renter-insurance.aspx