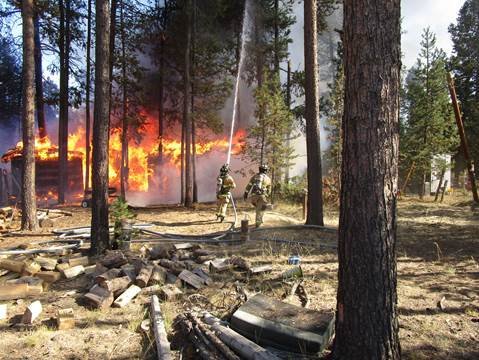 La PINE, Ore. (KTVZ) – A fire that destroyed a manufactured home in La Pine Tuesday afternoon was spreading toward nearby homes and the forest when the first crews arrived, prompting Level 3 evacuation notices for residents in the immediate area for over an hour, the Deschutes County Sheriff’s Office said.

Several neighbors in the area called 911 dispatchers to report the fire around 2:20 p.m. in the 57000 block of Boundary Road, and the first La Pine Rural Fire Protection District crews to arrive found a house was fully involved.

La Pine Fire Chief Mike Supkis said neighbors in the heavily wooded area reported the home ablaze and the agency responded with more than two-dozen firefighters and support personnel. Sunriver Fire sent a structural engine to help, while the Oregon Department of Forestry and U.S. Forest Service provided crews and wildland engines due to the quick spread in warm and dry conditions.

The first arriving crews found a manufactured home with a “snow shed” roof, woodshed, several vehicles and trees on fire, with flames spreading toward several neighbors’ homes, RVs and outbuildings, the fire chief said Wednesday. In addition, “significant amounts of ammunition were exploding in the fire,” Supkis added.

Firefighters were able to first contain the fire to the property, then knock down the main body of the fire as resources became available. The home’s occupants were not home at the time and no injuries were reported, Supkis said

Crews shuttled over 25,000 gallons of water by tender to fight the fire.

The home was destroyed, Supkis said, and an investigation into the cause is underway. The American Red Cross was contacted to offer assistance to the residents.

Evacuation notices were sent by emergency alert to residents between Camino De Oro north to Sparks Drive and from Boundary Road east to Second Street. Sgt. Jayson Janes urged people to avoid the area while crews worked to put out the blaze.

“All evacuation levels are being dropped,” Janes said in a 3:40 p.m. update. “Residents that were evacuated can return to their homes. Some roads will remain closed while fire crews continue working in the area.”