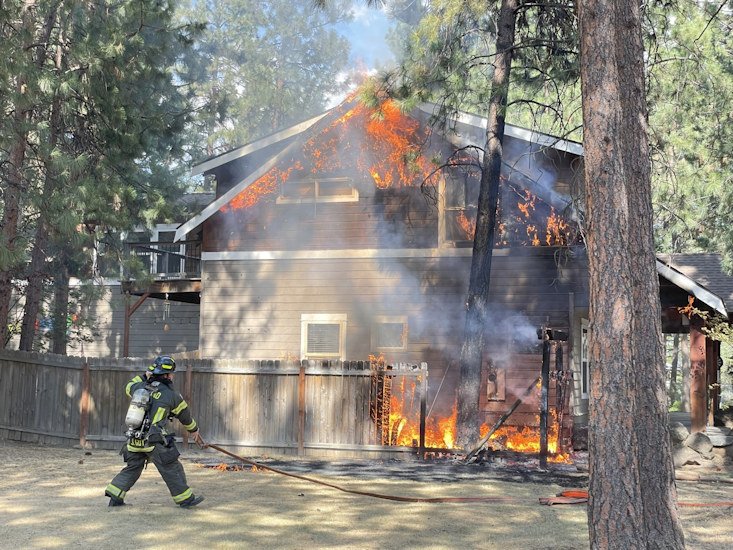 BEND, Ore. (KTVZ) – A fire that left $200,000 in damage to a southwest Bend home Friday afternoon had a familiar cause: improper disposal of oil-soaked rags from a staining operation, officials said.

Bend Fire crews were dispatched shortly before 4 p.m. to the fire in the 19500 block of East Campbell Road, off Century Drive, Fire Inspector Jason Kamperman said.

They arrived to find flames on the left side of the two-story home, spreading from a Ponderosa tree to the second floor and roof line, Kamperman said. A wooden fence was fully ablaze, he added.

The first engine company quickly put out the fire while other units checked and found minimal extension to the interior, though significant smoke damage, the fire inspector said.

The homeowners had just arrived home when they heard some crackling noises and investigated, finding a fire on the side of the house. They called 911 and tried to put out the blaze with a garden hose, without success, Kamperman said.

An investigation found the oily stain rags were placed outside, near combustible materials, and spread rapidly to a nearby tree, fence and the home. Losses were estimated at $150,000 to the structure and $50,000 to the home’s interior contents.

“Every year, fire departments across the country respond to similar fires that are caused by spontaneous combustion, which occurs through an oxidation process,” Kamperman explained in a news release.

“Oily rags used for staining should be disposed of properly, which includes hanging them outside to dry, and once dry, they can be disposed of in an approved metal container,” he said. “Never pile oily rags together, which can create heat from oxidation and can ignite the oils in the rags and spread to other combustibles nearby.”