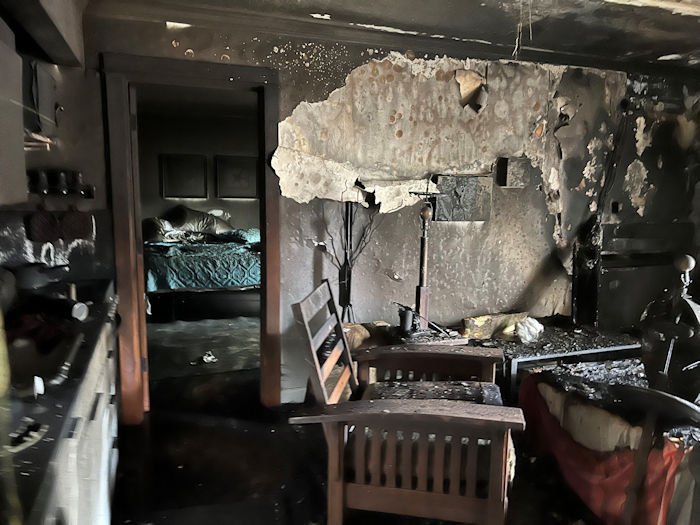 (Update: Cause determined; fire was in Airbnb rental unit; other units not damaged)

BEND, Ore. (KTVZ) – A fire traced to a failure in a heating-cooling unit caused $120,000 damage to a condominium unit in northwest Bend Saturday afternoon, prompting nearby residents to evacuate the three-story building, officials said.

Smoke was reported to be coming from a first-floor end unit at the Bend Riverside & Pioneer Park Condos in the 1500 block of NW Wall Street around 3:20 p.m., Bend Fire & Rescue Deputy Fire Marshal Cindy Kettering said.

The first crews on scene found smoke coming from the front and back doors of the first-floor unit, an Airbnb rental whose two guests were not there when the fire broke out, she said.

“We forced entry and did find that unit engulfed in fire,” Kettering said.

The fire was reported knocked down around 20 minutes later, and a search of the unit and building turned up no one inside. No injuries were reported.

Kettering said, “Everyone did exactly right – evacuated their unit in a timely manner, went to a safe place, called 911. So that was exactly perfect, how they acted. And we’re just happy no one was home at the time of the fire.”

Crews checked for any further extension of the fire, but determined the damage was confined to the one unit. Kettering said there was concern that the two units above it in the upper two floors could have smoke and heat damage, but they only turned out to have a minor smoke odor, she said.

Kettering said the fire was close to going through the patio door and spreading when firefighters stopped it.

“It certainly could have been far, far worse,” she said.

Kettering also said in a later news release, “Bend Fire & Rescue would like to commend the neighbors at the condominium complex for taking the right actions in this situation. They saw smoke from one of the units, activated a manual pull station, and evacuated to a safe location.

“Remember that in an emergency, seconds count.  If there is a fire, get out right away, go to a safe location, and never go back inside for any reason.  For more information on fire safety and emergency preparedness, visit our website at www.bendoregon.gov/government/departments/fire-rescue/education-safety-tips.“