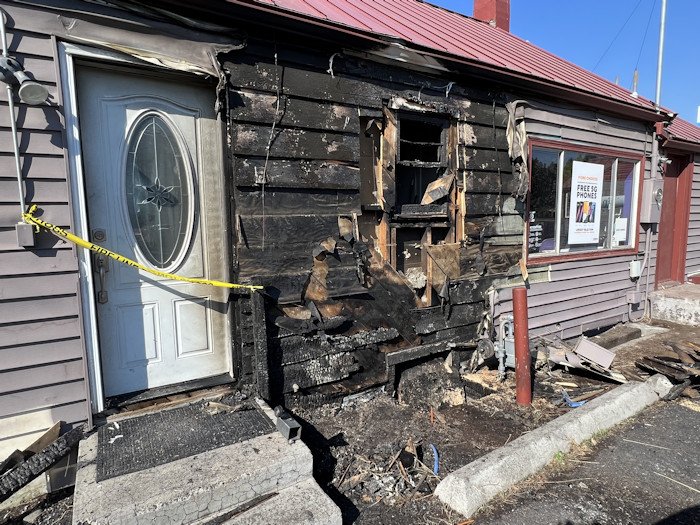 BEND, Ore. (KTVZ) – A fire that damaged the exterior of a Northeast Third Street business early Saturday morning has been determined to be intentionally set, Bend investigators said, the second apparent arson blaze in the area in recent days. Police had no immediate information regarding any connection between the fires.

The first units to arrive found a fire at Spiked Wireless, 1036 NE Third Street, she said. It was burning on the building’s exterior and was quickly knocked down.

Crews checked the interior and attic spaces for any extension, but found the fire did not get inside. It charred one window frame, Kettering said, but there was no smoke or water damage to the interior.

The fire damaged the building’s natural gas meter and electrical lines, which were secured by Cascade Natural Gas and Pacific Power,

Damage to the structure and contents was estimated at $25,000.

Investigators determined the fire was intentionally caused, Kettering said. Bend Police and Bend Fire are continuing their investigation, and anyone with information was asked to contact Bend Police at 541-693-6911.

Less than a mile away, a fire Tuesday morning heavily damaged a home in the 500 block of Northeast Olney Avenue that had been listed for sale, and that blaze also was determined to be intentionally caused. Officials said no one was home at the time of that fire, and asked the public for any information that could assist investigators.

While there was no initial indication of a connection between the fires, Kettering concluded Saturday’s news release by saying: “Property owners, this is a good time to take a look at your property and take steps to improve safety and security. Adding lighting, securing trash and recycling bins away from the building, and removing dry and dead vegetation around your property are all great steps to take to help improve the safety of your home and business.  Find more information on a variety of safety-related topics at https://www.bendoregon.gov/government/departments/fire-rescue/education-safety-tips.“