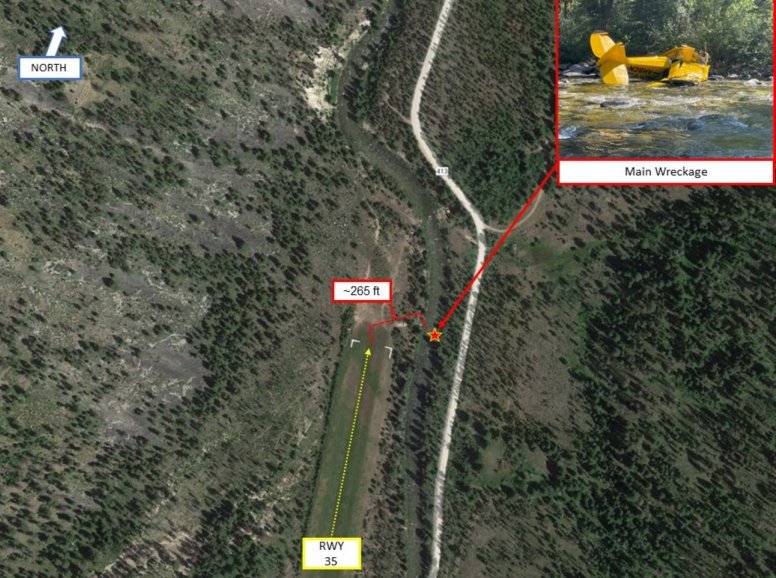 Happened just after takeoff from airport near Yellow Pine, Idaho

WASHINGTON (KTVZ) — Federal investigators’ initial report sheds some new light on an August 15 small plane crash that killed a Bend firefighter and his twin brother just after they took off from an airport near Yellow Pine, Idaho. But fuller answers as to what happened — and why — could be months or even a year out, they said.

Bend Fire & Rescue Engineer Daniel Harro, 38, was pilot of the Aviat “Husky” plane, accompanied by twin brother Mark. They were accompanied by Daniel’s dog, Cinder, which survived the crash, which occurred as they were returning from a backcountry camping trip.

The plane crashed around 6:30 a.m. local time just after taking off from Johnson Creek Airport near Yellow Pine, Idaho, according to the National Transportation Safety Board preliminary report issued this week; officials said a final report could be a year or more out.

A witness camping at the airport told investigators he saw the plane taxiing to Runway 35, then returned to his tent due to the cool early-morning weather.

“He recalled hearing the airplane’s engine RPM rise, like the pilot was conducting a runup,” the report said. “The witness stated that he then heard the airplane take off, which was followed shortly after by a sound similar to ‘a door slamming shut.’”

About four hours later, the witness flew out of the airport, then as he returned spotted the plane in the creek near the end of the runway.

The plane crashed about 265 feet northeast of the end of the runway and “came to rest upright in a creek,” the report said. No ground scars or damaged vegetation were seen in the area of the wreckage, which was moved to a secure location for further examination.

There was no fire or explosion, they said,  and “no visible ground scars or damaged vegetation” in the area of the crash.