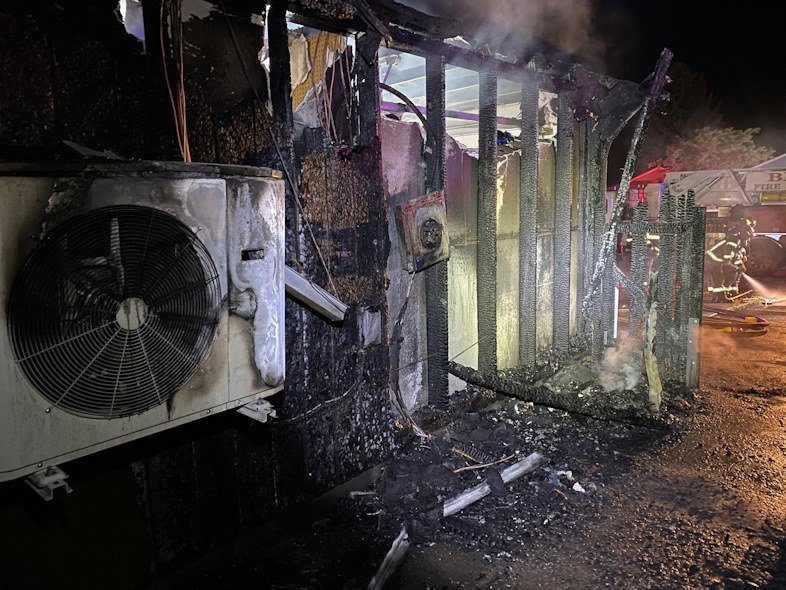 (Update: Adding cause of loud booms, pops heard in neighborhood)

BEND, Ore. (KTVZ) – A fire traced to improper disposal of oily rags broke out early Friday morning and caused $100,000 damage at a northeast Bend home, but the family was awakened by smoke alarms and escaped uninjured, a fire official said.

The first crews to arrive found flames on the exterior of the single-story home, spreading into the attic, and quickly stopped it, Derlacki said.

The family of three living in the home awakened to the sound of smoke alarms and found the fire on the outside of the garage, escaping without injury, he said.

The smoke alarms wake-up and quick 911 call meant crews were able to keep the fire from spreading to the interior of the home. Damage was limited to the garage and attic, sparing the living area. However, damage was estimated at $100,000 to the home and contents.

Derlacki said an investigation determined oily rags were improperly disposed of into the trash Thursday night after the deck was stained.

Asked about the loud pops or booms several area residents reported hearing, Derlacki said the fire began next to the home’s power meter, which “caused the wiring to short out and produce a lot of sparks and noise.” He said Pacific Power disconnected the home’s power at the transformer.

Derlacki also noted that the power was not part of the fire’s cause, but was damaged by the blaze.

Spontaneous combustion of oily rags occurs when rag or cloth is slowly heated to its ignition point through oxidation, Derlacki said.

“This is an accidental fire, but this type of fire can be prevented,” he said in a news release. “Bend Fire and Rescue reminds everyone that when you’re using any natural stains and oils to treat decks, furniture, or any other wood projects to be sure to dispose of the cloth used properly.

“Use a container with a tight-fitting lid. A metal can is preferable but a plastic can or zip lock bag can work if nothing else is available. Place soiled and used rags inside and then fill the rest the way with water, seal the top and do not open it. This will prevent the oils from oxidizing, and thus keeping the rags from heating up and igniting. This will prevent the oil in cloth from starting its oxidation and heating process.”

More information can be found on their website: https://www.bendoregon.gov/government/departments/fire-rescue/safety-tips-emergency-preparedness/year-round-safety-tips