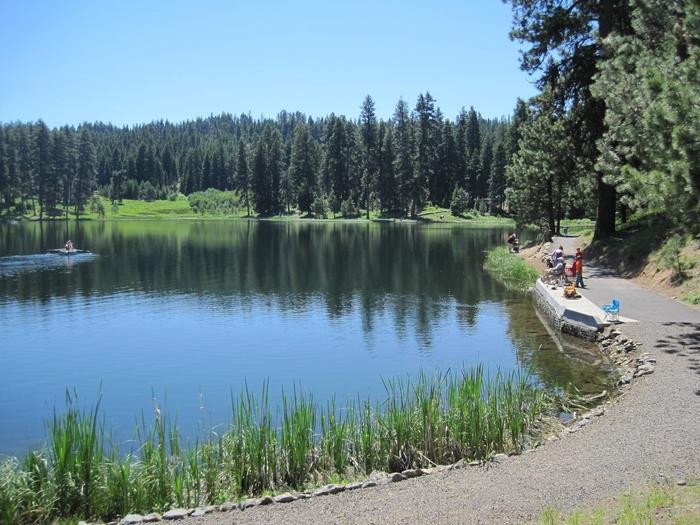 PRINEVILLE, Ore. (KTVZ ) — A federal appeals court panel has granted Blue Mountains Biodiversity Project’s motion for a stay, leaving in place an injunction that prevents the Forest Service from logging the mature forest around Walton Lake in the Ochoco National Forest, while the group appeals a largely negative court ruling.

Walton Lake is located in the Ochoco Mountains in Central Oregon, northeast of Prineville. The lake is one of the most popular recreation areas on the Ochoco National Forest, and is known for its old-growth trees, abundant wildlife, and scenic beauty, according to the Blue Mountains Biodiversity Project, which issued a news release Tuesday on the latest developments in the years-long court fight.

However, Kern noted the appeals court “temporarily granted the stay on implementation of the restoration project while the appeal is being addressed. The court also expedited the appeal, so it should be resolved by next spring.”

The rest of the environmental group’s news release continues in full below:

BMBP, represented by Tom Buchele at Earthrise Law Center, and Jesse Buss and Bridgett Chevallier at Willamette Law Group, have been fighting to stop logging of the forest around Walton Lake since 2015.

The Forest Service has repeatedly attempted to log this magnificent and ecologically important forest in three separate but virtually identical proposals over the past several years. BMBP and its dedicated attorneys successfully stopped the agency’s first two logging proposals, and are now appealing to the Ninth Circuit Court to stop the agency’s third and most recent attempt.

Fortunately, on Friday, Nov. 18th, a Ninth U.S. Circuit Court of Appeals panel stepped in and agreed to leave the injunction against logging in place—and to keep the trees around Walton Lake standing—while BMBP’s appeal of the lower court’s decision is being considered.

The Walton Lake sale authorizes clearcutting of all the fir trees, including very large and old firs, on approximately 35 acres. The sale also includes an additional 43 acres of logging in mature and old forests that form the scenic backdrop of the lake and provide important habitat for wildlife. BMBP’s initial lawsuit showed that although the Forest Service’s notices to the public described their proposed logging as “thinning,” an internal Forest Service document described the logging of the old growth fir forest as a “clearcut.”

The Forest Service is attempting to use public safety as a guise for old growth logging. The agency claims that logging is needed to eliminate root rot that is supposedly creating a public safety problem, even though many of the targeted firs are not currently infected and are nowhere near the Walton Lake campsites or roads.

The agency is planning to essentially clearcut the old growth and predominately fir forest around the lake because some of the firs have laminated root rot, as they have for decades. Such heavy logging is unnecessary since the Forest Service has the ongoing ability to fell legitimate roadside and campground hazard trees, and has been using this method to protect public safety for years.

This appeal could set multiple important legal precedents across the Ninth Circuit (a huge area encompassing most of the western United States); it has the potential to resolve long-standing legal questions about the types of documents courts are allowed to consider in environmental cases like this one, whether the Forest Service must focus on evaluating local environmental impacts for relatively small-acreage timber sales, and whether the Forest Service is allowed to award logging contracts to companies before completing the environmental review process under NEPA.

For example, the Forest Service has maintained an open contract for logging in the Walton Lake sale since 2016, despite formally withdrawing the proposal twice in recent years.

“The Forest Service’s responses to the public safety issues like those at Walton Lake are far too often over-reactions that end up favoring the logging of old and large commercially valuable trees. Here the Forest Service’s own experts recommended a much less extreme response, but the actual Forest Service decision-makers decided to stick with their premature contract and log far more old and large trees to generate more revenue,” says Tom Buchele, a clinical professor with the Earthrise Law Center.