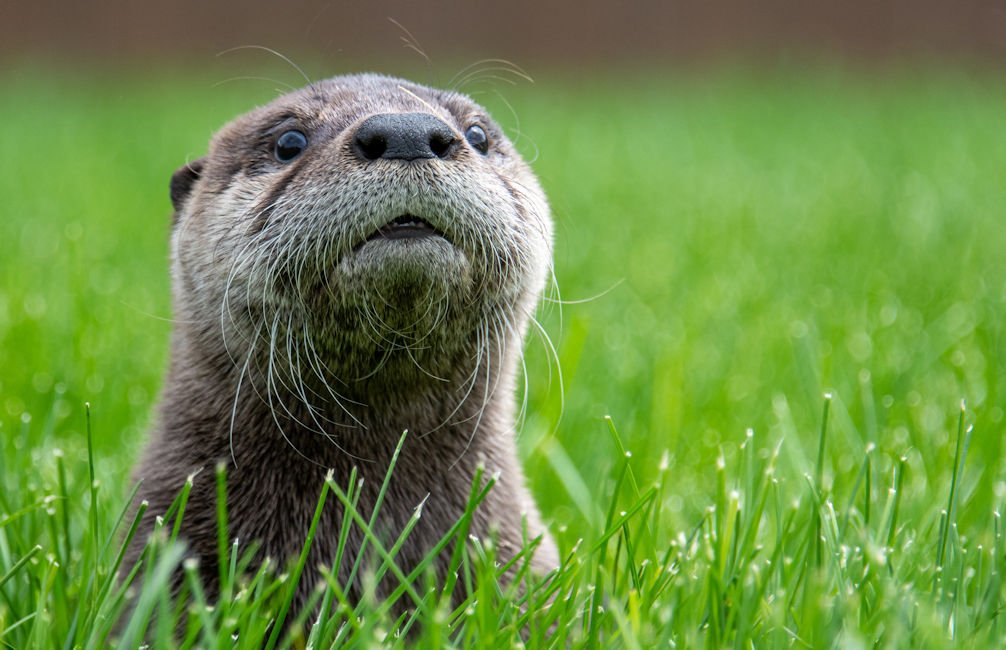 Gaining weight and ‘getting healthier by the day’

BEND, Ore. (KTVZ) —  A baby North American river otter, estimated to be about 8 weeks old, was found in bad shape at a south Deschutes County golf course and is now recovering in the care of the High Desert Museum, officials said Thursday.

While the male pup is not presently in public view with the other two otters at the museum, the intent is to eventually introduce him into the Autzen Otter Exhibit, the museum said.

The pup was found the week before Memorial Day weekend on a golf course near Sunriver. The otter, which was emaciated and severely dehydrated, was brought to the museum temporarily for care while several wildlife professionals tried to locate his mother. But that search failed.

This week, the Oregon Department of Fish and Wildlife determined that the otter should remain with the museum, officials said.

“We don’t know exactly what happened to this otter, although we do know that without his parents, he wouldn’t have survived in the wild,” said Museum Curator of Wildlife Jon Nelson.

“This was a unique situation where this otter pup does appear to have been legitimately orphaned,” Nelson continued. “This is the time of year when people will sometimes find young animals seemingly alone in nature. Often, though, the parent has only temporarily left the young in a secluded spot to feed or rest and plans to return. The best thing to do is leave the animal there and contact the local ODFW office to report it.”

The pup, which weighed 2.4 pounds on arrival, is gaining weight rapidly and getting healthier by the day. He presently weighs about 4.6 pounds, according to the museum news release, which continues below:

Young otters like this can be very challenging to keep healthy. Museum staff are experienced and well-equipped to offer the specialized care this animal needed while attempts were made to locate his wild family.

Successful long-term rehabilitation would require he be raised with other otter pups of the same age over eight to nine months. Unfortunately, that type of care is not currently available in Oregon. With the family having not been found over the course of more than a week of looking, long-term human care is now the pup’s best option.

Otters live approximately eight to nine years in the wild, and often longer in human care.

“Caring for a young otter is intense work, and our wildlife team has done an incredible job juggling bottle feedings around the clock,” said museum Executive Director Dana Whitelaw, Ph.D.

This is not the first young otter to come into the museum’s care. A pup found along the Metolius River was brought to the Museum in 2017, and wildlife staff raised it from about 7 weeks old.

That otter, a male named Pitch, resides in the Autzen Otter Exhibit with Brook, an approximately 10-year-old male. In March, a third river otter, Rogue, 12, was humanely euthanized after his health deteriorated rapidly.

The museum cares for more than 130 animals, from otters to fish. All of the animals are non-releasable, either due to injuries or because they are habituated — they became too familiar with humans and possibly never learned how to hunt or avoid predators. At the Museum, they serve as ambassadors that educate about the conservation of High Desert species and landscapes.

THE HIGH DESERT MUSEUM opened in Bend, Oregon in 1982. It brings together wildlife, cultures, art, history and the natural world to convey the wonder of North America’s High Desert. The Museum is a 501(c)3 nonprofit organization accredited by the American Alliance of Museums, is a Smithsonian Affiliate, was the 2019 recipient of the Western Museums Association’s Charles Redd Award for Exhibition Excellence and was a 2021 recipient of the National Medal for Museum and Library Service. To learn more, visit highdesertmuseum.org and follow us on Facebook, Instagram and Twitter.