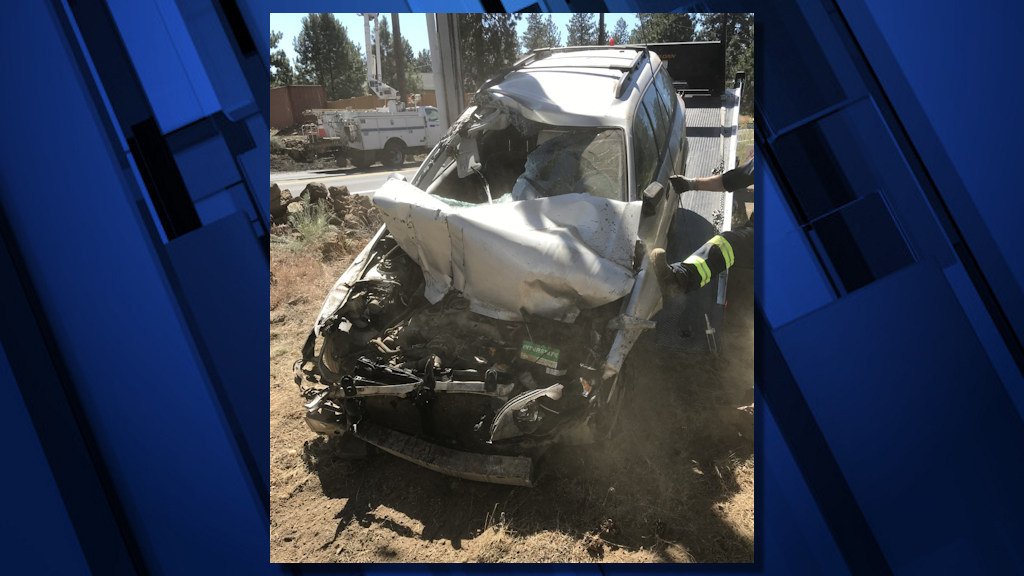 DCSO deputies say her SUV hit rocks, one hit another car – and she later tried to flee hospital

BEND, Ore. (KTVZ) – A drugged driver left Baker Road in Deschutes River Woods Wednesday afternoon and her SUV struck a rock outcropping and went airborne, toppling power lines and knocking out power to about 1,700 residents while sparking a grass fire and later trying to run away from the hospital, Deschutes County sheriff’s deputies said.

The sheriff’s office responded around 2:20 p.m. to the reported crash near Baker and Apache roads in the neighborhood south of Bend, Sergeant Jayson Janes said late Wednesday.

The first reports from the scene said a vehicle crashed into a power pole and was on fire, but deputies found the lines had fallen to the ground, sparking a grass fire. Residents began trying to put out the blaze and the first deputies on scene used their fire extinguishers to douse the flames, Janes said.

Deputies determined a 50-year-old Bend woman was driving a Subaru east on Baker Road near Apache Road when her SUV left the road, striking a rock outcropping and causing her to go airborne and crash into a power pole’s guide wire, causing the lines to go down, the sergeant said. He added that her SUV came to a stop when it struck a moving truck and got stuck underneath it.

When the woman’s SUV hit the outcropping, one of the rocks went airborne and struck a passing car with three occupants, none of whom were injured.

The driver was taken by Bend Fire ambulance to St. Charles Bend for treatment of non-life-threatening injuries. Janes said when she arrived at the hospital, she tried to run away but was quickly detained by deputies.

She was cited and released at the hospital on charges of DUII-drugs, reckless driving, four counts of reckless endangering and first- and second-degree criminal mischief.

The downed lines knocked out power to about 1,700 Pacific Power customers. Baker Road was closed for about 90 minutes for utility crews to repair them.