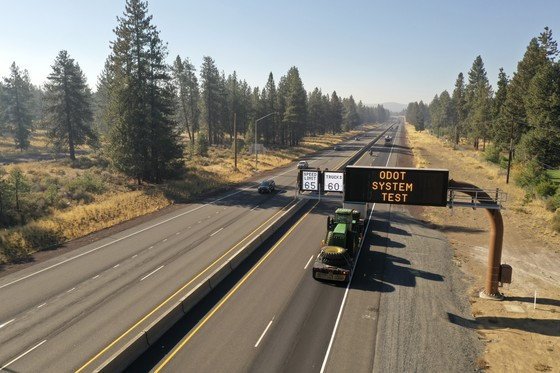 Stats show they reduce crashes; 40% of crashes in area involve going too fast for conditions

These new digital-type signs will replace the standard black-on-white speed limit signs that people are used to seeing along the highway. Additional speed limit signs will be located over the road. There are seven sign locations on both directions of U.S. 97, from just south of Bend near Knott Road to the north end of La Pine.

The agency says the new speed signs have a key benefit: speed limits that can be adjusted based on road and weather conditions. Computers will analyze data from several weather stations along the 10-mile stretch, measuring factors like road surface traction, humidity, temperature and visibility, and lower speed limits in poor weather conditions.

When conditions improve, speed limits will be raised again.

The signs will be turned on Monday, but the variable speed function will not be activated until November.

Data from the Federal Highway Administration shows variable speed limits reduce the number and severity of crashes, especially during bad weather. Over 40% of the crashes on this section of U.S. 97 involve a driver who was going too fast for conditions.

“We will be monitoring the variable speed limit corridor closely with state and local law enforcement, and if successful, we hope to expand this technology further south on U.S. 97,” the announcement said.

ODOT encouraged drivers to prepare and plan for longer trips during winter storms and keep an eye on tripcheck.com for the latest road and weather information.

ODOT Region 4 Public Information Officer Kacey Davey said the Highway 97 signs will display the default speed limit of 65 mph for cars and 60 mph for trucks most of the time, unless inclement weather or other safety reasons to slow traffic occur.

It’s the second such system in the state, she said, after a 30-mile corridor of variable speed limit signs were installed on Interstate 84 in Eastern Oregon.

“It’s pretty cool technology,” Davey told NewsChannel 21. “There are also some of these in Portland, but they are advisory and not regulatory, and used more for traffic congestion purposes.”