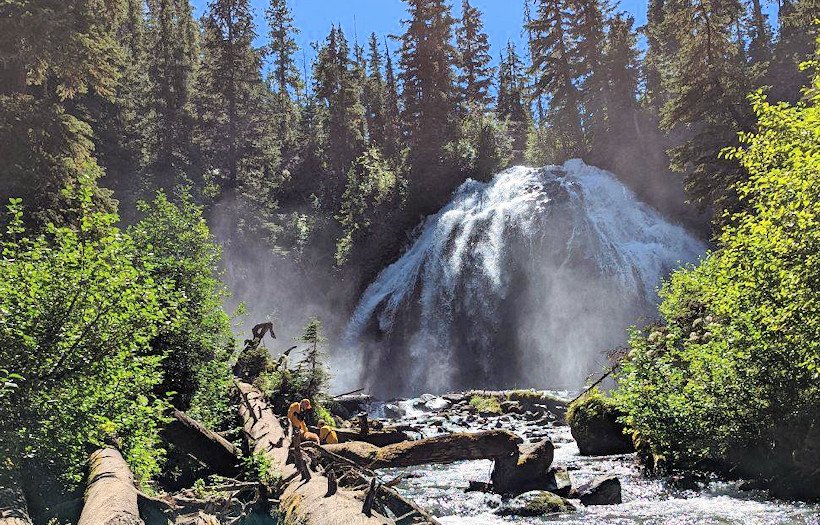 SISTERS, Ore. (KTVZ) – Deschutes County sheriff’s deputies and Search and Rescue volunteers came to the assistance Sunday of a hiker with a medical issue near Chush Falls, south of Sisters, the second such incident in that area this weekend.

Around 2 p.m. Sunday, 911 dispatchers got a call from a 52-year-old Bend man who said he was about five miles in on the trail at the upper falls and was having a medical issue, said Deputy Kyle Joye, assistant search and rescue coordinator.

Two ATV deputies and a Special Services deputy were the first dispatched to the call, Joye said. The ATV deputies went to the trailhead and began to hike to the patient.

At the time of the call, two SAR volunteers happened to be working and the caller joined a phone conference with the Special Services deputy and a volunteer with advanced life support certifications.

The volunteer conducted a medical assessment over the phone and 15 volunteers then headed for the trailhead with a wheeled litter and medical equipment.

The ATV deputies made contact with the man shortly after 3 p.m. and the SAR medical team did so about 25 minutes later, Joye said.

After a medical assessment, the patient was able to walk, escorted by the volunteers, back to the trailhead, where he was released to the care of family members.

On Saturday, county 911 dispatchers got a call just before noon from someone advising the hiker, a 56-year-old Bend woman, had fallen and injured her knee, preventing her from being able to hike back to the trailhead on her own, according to Deputy Aaron Myers, assistant SAR coordinator.

A total of 11 Search and Rescue volunteers responded to help the woman, reaching the trailhead just after 1 p.m. and walking about 2.3 miles, reaching the hiker shortly after 2 p.m., Myers said.

They performed a medical assistant and placed the woman in a wheeled litter. She was brought back to the trailhead, from which medics took her to the hospital for further treatment.