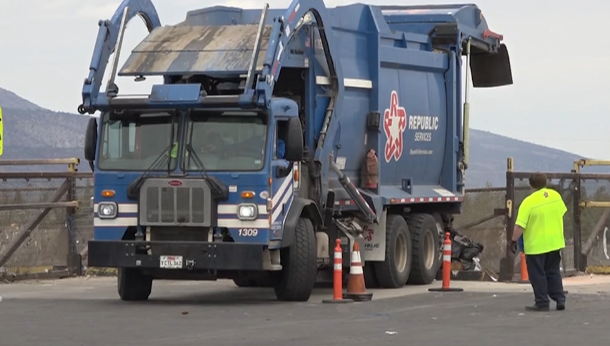 (Update: Adding video and comments from Deschutes County and a customer)

REDMOND, Ore. (KTVZ) — Deschutes County commissioners gave the thumbs up this week for a $20 million plan to upgrade the 30-year-old Negus Transfer Station and Recycling Center on Northeast Maple Avenue in Redmond.

The project has been in the works for several years, county Solid Waste Director Chad Centola said Friday.

He said they have been working with a design team for about a year and a half, and are close to sending the project out to solicit bids from contractors.

Transfer stations are sites are where waste is brought and recyclables are sorted, then trucked to the landfill.

The new facility will have a weigh scale and will be fashioned to look and operate much like Knott Landfill, the county’s landfill in southeast Bend.

Jesse Martinez was at the Negus transfer station on Friday afternoon.

“It works, but it gets crowded,” he said. “Compared to Knott, where you pull in and everyone leaves in a separate way they came in, it makes it a lot less crowded. And people who can’t back up have a hard time here.”

The plan is to keep the recycling facility as is at the Negus facility and to upgrade the waste-handling side, which is over capacity, to better handle growth in the Redmond area.

Centola said they expect to start construction within a year and anticipate it will take about a year to complete. Also, he said, redoing the La Pine Transfer Station is next on the list for the department.