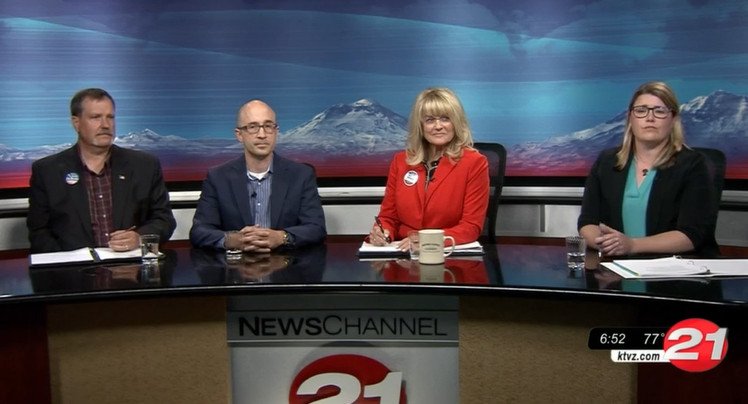 Differences emerge on issues from rural development to COVID-19 response

BEND, Ore. (KTVZ) – Less than a week before ballots start arriving in the mail, Deschutes County commissioners Tony DeBone and Patti Adair, both Republicans, defended their decisions and views in a live and livestreamed debate at KTVZ Thursday evening with Democratic challengers Oliver Tatom and Morgan Schmidt.

All four candidates answering questions during the hour-long debate, moderated by NewsChannel 21’s Lee Anderson, spoke of the challenges of the past several years and the ones ahead, but the incumbents refuted the challengers’ claims they had failed to do the job well and spoke of what DeBone, seeking a fourth term, said in his opening statement was a “happy, healthy, well-adjusted level of government.”

Tatom, a paramedic and registered nurse who as a child lost his family’s home in the 1996 Skeleton Fire southeast of Bend, said he hopes his two young kids move back to Central Oregon as he did to raise their own families, but was “less hopeful” in recent years after watching the soaring price of housing “slipping out of reach of the middle class.”

Adair said of her first term, “It’s a hard job, but it is my passion, and I do love it.” In fact, despite all the tough issues from the homeless to growth, she considers it “the best four years of my life.”

Schmidt, a pastor at First Presbyterian Church for the past seven years, said her “passion to serve the community” led her to start the grassroots Pandemic Partners that helped people and offered shelter during extreme weather.

Asked the biggest challenge facing the county, all gave some form of answer about the shortage of affordable housing. Adair listed things she’s helped make happen with partners like Habitat for Humanity and the Central Oregon Veterans Village. DeBone said after nearly 50 years of state land-use planning rules, he wants to “open up the book” for more opportunities to build on rural private lands.

Schmidt said she has a “very different vision” of how to create more housing, and is opposed to a 57-acre expansion adjacent to Bend that means “more rural sprawl – not part of the dream I have for Deschutes County.”

The two commissioners’ vote to put a psilocybin opt-out measure on the ballot, as dozens of counties and cities have, was a target, as expected. Adair said the rules are not clear yet and repeatedly noted that Bend and Sisters are not joining others in the opt-out vote, meaning services will be available in the county for those who need it.

“Let’s wait and see those rules,” she said, drawing fire rom Schmidt, who said she doesn’t believe veterans or others struggling with mental health issues can afford to wait. She noted that a majority of the county’s voters supported the statewide measure two years ago, while DeBone said “a lot of rural precincts did not vote for this,” and that they “need to be respected as well.”

“We’re not taking it off the table,” Adair said, noting that 75% of counties have sent it to the ballot due to the lack of clarity on state rules. though Tatom called the current vote “a profound waste of time and taxpayer dollars.” He also noted that supporters of allowing psilocybin services in the rural areas have to vote no on the opt-out ballot measure, with a risk that “voters will be more confused,” and no sign of education or marketing on how that yes-equals-no vote works.

A petition drive put the proposal for non-partisan commission races on the ballot, and when candidates were asked their views, Schmidt said about 40% of county voters are non-affiliated and that the current closed primaries “can lead to more extreme candidates. We don’t need to be caught up in the national drama.”

But DeBone and Adair defended the status quo and said party platforms can help voters determine where a candidate stands. DeBone said while “we do live in a hyper-partisan world,” he sees himself as a “reasonable, responsible Republican, serving all of the people.”

Tatom noted that commissioners could have sent such a proposal to voters but instead put the burden on volunteers to gather 7,0000 signatures. DeBone said the broader campaign means “a lot of people are paying attention, not just the three of us.”

Asked if rural areas are adequately represented, Adair said, “Many times, I fought for money to come here and it went to Portland.”

Schmidt continued her criticism of commissioners allowing development of a 710-acre property west of Terrebonne with “71 10-acre estates.” She said many farmers and ranchers were “deeply disappointed and betrayed” with that decision.

But Adair said the parcel “is actually a rocky-soils piece of land” that “obviously needs to be utilized. You have rights when you’re a property owner. Not everyone wants to live on a 4,000-square-foot lot in Redmond or Bend. … We need all housing, not just in the city.”

Schmidt countered, “We have plenty of large parcels where people can live rural,” but not endless supplies of water for needs including wildlife. She said such developments “make it more expensive for people who grow to survive. They’re asking us to protect those lands.”

Tatom derided DeBone’s talk of wanting to “open the book” on the land-use planning system that came into existence under Republican Gov. Tom McCall, “who knew if we didn’t take steps to protect rural lands, we’d lose them. If we hadn’t, the Deschutes Basin would look more like the Los Angeles Basin.”

Asked to grade the county’s COVID-19 efforts, candidates all split off and gave high praise to county staff for their efforts, but the challengers did not say the same of the commissioners they’re trying to unseat.

Adair said she “drove a plan to get businesses back open to Salem.” And DeBone said “the governor led with fear,” with a “shutdown, lockdown, rights trampled. I’m very proud of the choices we made. … I’ve got nothing to apologize about.”

After Schmidt brought up Adair’s support of the controversial drug Ivermectin, the incumbent noted its 2015 Nobel Peace Prize and it  was “not just a horse dewormer,” as others said. Schmidt said it was “not recommended by experts” and said the two commissioners “treated the issue like it was the common flu. I lost my father as a result of the pandemic.” She gave an A to the staff but said “I think our county commissioners failed us.”