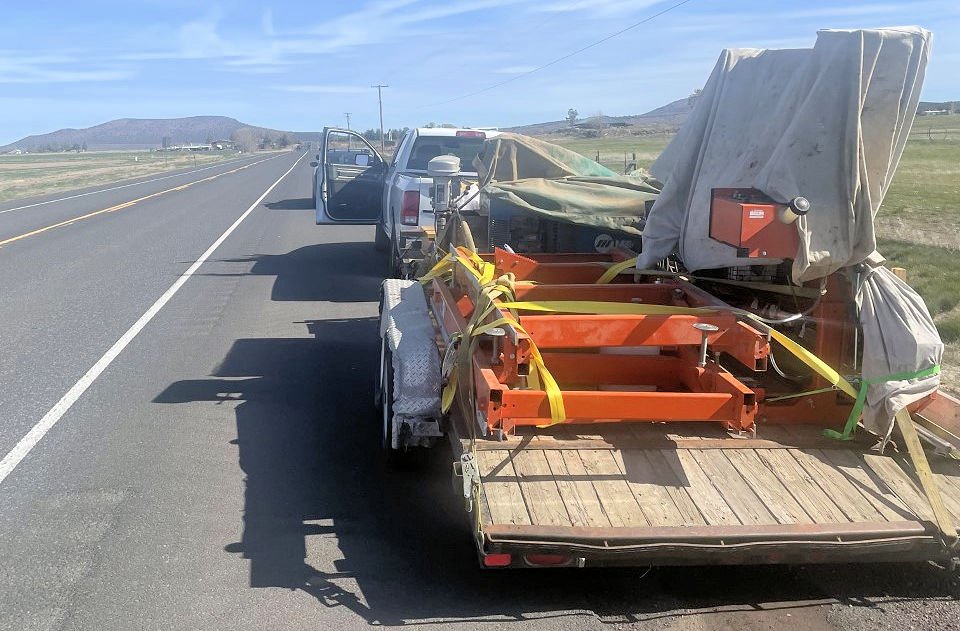 TERREBONNE, Ore. (KTVZ) – Deschutes County sheriff’s deputies made a high-risk, guns-drawn traffic stop Wednesday on Highway 97 north of Terrebonne of a pickup towing a flatbed trailer loaded with items stolen from a property east of Sisters, where they conducted surveillance since Sunday’s break-in. Two Portland-area men were arrested on burglary, theft and other charges.

The sheriff’s office got a report Sunday of a burglary at a residence in the 60000 block of George Cyrus Road, Sergeant Jayson Janes said. They found the main residence and outbuildings on the property were broken into and property taken.

Deputies also found a large flatbed trailer on the property, loaded with a large amount of machinery and equipment taken from the outbuildings, Janes said.

“It appeared the persons involved in the burglary were planning on coming back to retrieve the trailer,” Janes wrote in a news release, so DCSO Street Crimes Unit detectives were contacted to assist, and they were able to maintain surveillance on the trailer.

Around 8:30 a.m. Monday, detectives watched the trailer being moved from the location, towed by a 2021 Dodge Ram 1500, and kept up their surveillance, coordinating with deputies to pull it over.

A 42-year-old Tualatin man and a 39-year-old Portland man were arrested without incident, the sergeant said. Detectives were able to obtain statements and evidence connecting the two men to Sunday’s burglary.

Both men were taken to the county jail in Bend facing charges of first- and second-degree burglary, first-degree aggravated theft and unlawful use of a motor vehicle. The Tualatin man also is charged with first-degree criminal mischief and four counts of felon in possession of a firearm. The Portland man also was jailed on two arrest warrants out of Clackamas County.

The truck was towed from the scene and the trailer was returned to the property owner, Janes said, adding that the investigation is continuing, and more arrests are possible.