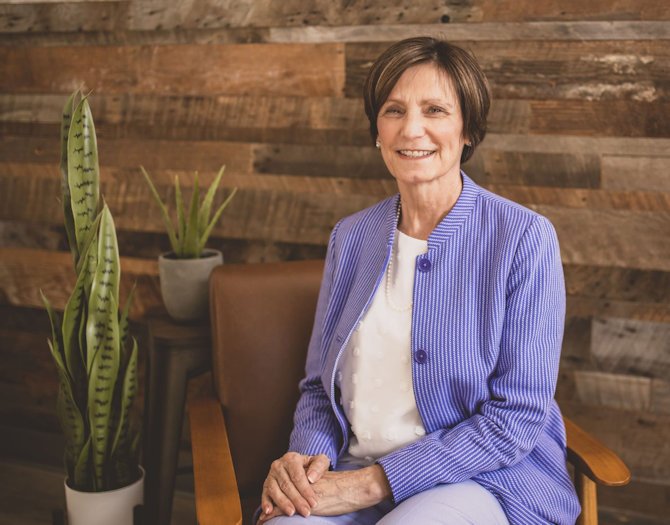 Representatives from the Coalition of Oregon School Administrators (COSA) made the trip from Salem to present the prestigious award for outstanding leadership in four essential areas: Leadership for Learning, Communication, Professionalism, and Community Involvement. Dr. Johnson will now be in the running for national Superintendent of the Year.

Bola Gbadebo was on hand for the big announcement and will have a report on NewsChannel 21 at Five.

Here’s the rest of the school district’s news release on the honor:

The award is a crowning achievement for the district, as Crook County High School Principal Michelle Jonas was Oregon’s Secondary Principal of the Year last year and CCHS Athletic Director Rob Bonner 5A Athletic Director of the Year. School Board Chair Jessica Ritter says awards like this are possible when exemplary leadership exists at the top.

“I was thrilled earlier this year that our high school received so much attention when their administration team, principal, and athletic director all received state-wide recognition for their achievements. I am blown away by this crowning achievement for our whole district, recognizing we have the best superintendent in the state,” said Ritter.

“Crook County is fortunate to have a leader like Dr. Sara Johnson at the helm during the pandemic and after. I believe we soared above the rest due to her problem-solving abilities, creativity, and grit. As a mother, I am grateful. As a school board member, I am proud.”

Dr. Johnson was recognized for many successes, including safely reopening schools during the pandemic before most other schools in Oregon, increasing the graduation rate at Crook County High School to 98%, successfully opening Steins Pillar Elementary School, creating a new hybrid learning program called Grizzly Mountain HomeLink, prioritizing improved school culture, and giving more voice to students and staff through yearly surveys and initiatives.

Those results have also led to consecutive years of enrollment growth, when many districts face declines, the school district said.

Long-time school board member Doug Smith says Dr. Johnson’s constant collaboration with the school board and community stakeholders during the pandemic led to districtwide improvements that are now considered “COVID Keepers.”

“Dr. Johnson’s decisive and collaborative leadership has led to unprecedented gains within the district. I believe we have the best superintendent in the state,” said Smith.

Assistant Superintendent Dr. Joel Hoff said he is proud to have his own children in the district and works directly with Dr. Johnson on student assessment, school culture, and other improvement initiatives. He says her unwavering commitment to excellence is paying off.

“Her leadership has reshaped the possibilities for what a small rural school district can achieve when combining quality leadership with a well-communicated vision for the future. The data clearly shows that achievement, school culture, and satisfaction of students and families have improved since Dr. Johnson arrived in Crook County,” explained Dr. Hoff.

“Dr. Johnson has not only been an amazing superintendent and leader of our school district, but she has also been a valuable community partner for Crook County. This recognition is well deserved,” mentioned Daniels.

Dr. Johnson was born and raised in Burns and has taught or led in mostly rural Oregon schools throughout her career.

One of her new priorities is to help overcome the mental health challenges many young students are facing post-COVID. She is currently enrolled in a program at George Fox University pursuing a degree in Child Psychology in hopes of leaving a lasting legacy of healthy students.