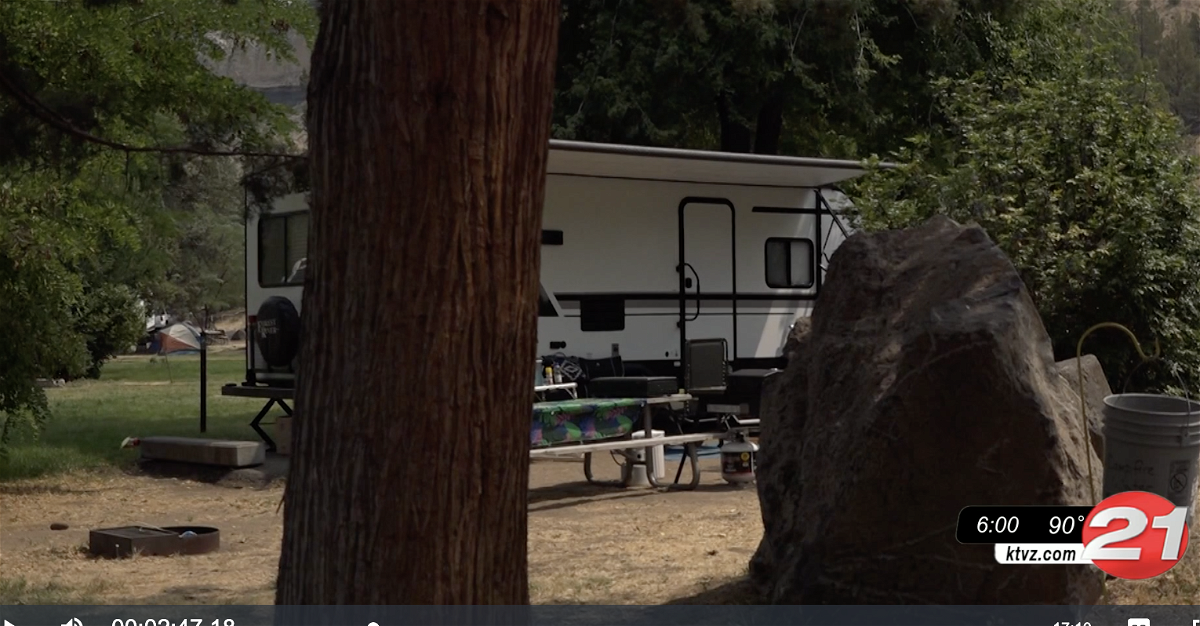 CULVER, Ore. (KTVZ) — Firefighters made strong progress Monday on stopping a rash of new wildfires across Central Oregon in the wake of weekend storms and lightning, holding the lines on the day-old 280-acre Fly Creek Fire near Lake Billy Chinook, where containment rose to 25%.

Firefighters made great progress today on existing wildfires across central Oregon. Resources were able to quickly find and respond to new starts throughout the day. Scattered thunderstorms with abundant lightning began moving across the area this afternoon bringing new starts. In total, resources have responded to roughly 40 incidents across central Oregon since yesterday.

Forward progression on the Fly Creek Fire has been stopped. Firefighters held the fire at 280 acres today and increased containment to 25%. Dozer line has been constructed around 80% of the fire perimeter.

This evening, firefighters are responding to seven smoke reports, Incidents 512-518, located north and northeast of the Oregon Badlands Wilderness area, near the intersection of George Millican Rd. and Reservoir Rd.

These reports were spotted by aircraft and are primarily on Prineville District BLM lands. All of the new starts are small, single-tree fires in close proximity to each other. There are a number of resources in the area, four of the incidents are currently staffed. The remaining fires will be staffed this evening as resources secure the incidents they are currently working on.

Smokejumpers are still in route to Incident 519 on the Deschutes National Forest, located in the Mt. Thielsen Wilderness. More information will be available on this smoke report when resources arrive on scene.

Firefighters secured 50% containment on the 1-acre Juniper Creek Fire today. Resources have left this fire for the night and will be returning tomorrow morning. Several smokejumpers and one engine will be staying out overnight on Incident 505, located near the Fly Creek Fire, to continue mopping up.

Incident 506, located near Lava Lake, remains at 0.2 acres. Smokejumpers will continue mopping up and stay overnight on this fire as well. The tenth-of-an-acre West Cultus Fire and Incident 505 are both 100% contained.

Thunderstorms are expected to continue over portions of central Oregon tonight. Strong outflow winds and frequent lightning remain the primary concerns for any new and existing fires. Red Flag Warnings remain in effect for gusty winds and low relative humidity through tomorrow at 9 p.m. Firefighters are prepared and will remain vigilant for any holdover fires that may become visible tomorrow.

The fire, near the Balancing Rocks along the Metolius arm of Lake Billy Chinook, quickly grew, prompting Level 3 “Go Now” campground evacuations and Level 2 “Get Set” alerts to residents in the Three Rivers area.

Some people staying at the evacuated Perry South and Monty campgrounds relocated to the Deschutes and Crooked River campgrounds.

“We saw a little bit of influx from people coming from the South Perry Campground. I’ll guess that five or six or seven families have shown up in this campground (Deschutes Campground) in particular,” Tyler Banks, a park ranger with Cove Palisades State Park, said Monday. “Obviously, we have reservations, so we had to respect the reservations, but we looked into what sites were going to be open for more than a couple of days to move people around.”

Level 2 “Get Set” fire evacuation notices were issued for the Three Rivers and Montgomery Shores areas.

Banks said they also have a large open field called the ‘D-loop’ prepared for more evacuees and fire staff.

“We started a fire ban here today, just to not add to issues,” Banks said.

But even with the Fly Creek Fire and smoky conditions, Banks said it’s not keeping people from enjoying the outdoors as August arrives.

“Most people are pretty used to it (fire season) — it’s actually a little late, in my opinion,” Banks said.

Last year, much of Central Oregon was under a blanket of smoke through most of July.

Jim Cyr, owner of the Cove Corner Store in Culver, rents boats, and he’s familiar with how fire worries can impact business, even in areas not directly affected by the flames.

“You know, you’re disappointed, because you’re having a good year and the smoke could slow things down,” Cyr said. “You know, people get scared to come over here. We’ll probably see more of an effect, depending on how the fire grows.”

“I believe the heat has changed more people’s plans than the smoke — so far,” Banks said.