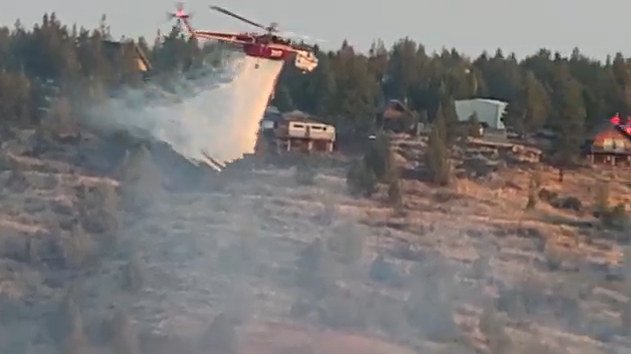 “Thank you fire crews for all your hard work making this happen!” the Jefferson County Sheriff’s Office said in an update.

Fire officials said Saturday morning that all lines held overnight and the fire was mapped at about 10 1/2 acres. Firefighters completed bulldozer and hand lines and a hose lay around the fire’s perimeter.

Level 2 “Get Set” evacuation alerts had been in effect for Three Rivers.

Mary Graff, a Three Rivers resident among those who evacuated, said Saturday, “It’s just incredible to see the support that we had, and all the different vehicles and trucks, and crews that came in — almost immediately hit the fire.”

“We also saw the planes dropping their loads on the fire before we actually left our house,” Graff said. “And we sat out here until 10 p.m. last night, and then we were allowed to go back in.”

Graff said she’s lived in other areas where wildfires hit, and there was nowhere near the same support.

Incident 775, named the Big Canyon Fire, was reported just after 5 p.m. Friday and at nightfall was estimated at about eight acres, officials said.

Six engine crews, a hand crew, a bulldozer, water tender and other resources responded on the ground, while in the air, two fire bosses, a single-engine air tanker (SEAT plane), a Type 2 helicopter and air attack plane helped firefighters on the ground.

Four large air tankers were ordered, officials said, but were stood down after fire bosses got a water line around the fire’s perimeter.

They said more state resources were called in Saturday morning, including a strike team of engines and a hand crew available from the Oregon Office of the State Fire Marshal, along with an additional Oregon Department of Forestry task force. ODF assumed unified command with Lake Chinook Fire and Rescue Friday evening.

As for the smaller blazes, the largest was held to a quarter-acre, two others a tenth of an acre and one was a single-tree fire.

The large fire broke out in the area of Southwest Upper Canyon Drive, and by 6 p.m. prompted a Level 2 “Get Set” alert for all of Three Rivers. The state’s wildfire dashboard on our Fire Alert page said it had grown to about 10 acres by 6:40 p.m.

“Evacuation Warning. Significant Risk,” the Jefferson County Sheriff’s Office advised on Facebook. “Pack your vehicle and be ready to leave at a moment’s notice.”

The Three Rivers Landowners Association said in its Facebook posts that the sheriff had called a Level 3 “Go Now!” evacuation in the Upper Canyon Rim Drive area. It also shared photos and videos of the aerial attack as it made good progress to stop the blaze’s spread.

The agency thanked all the fire crews who responded from several agencies and Forest Service law enforcement who helped deputies notify area residents.