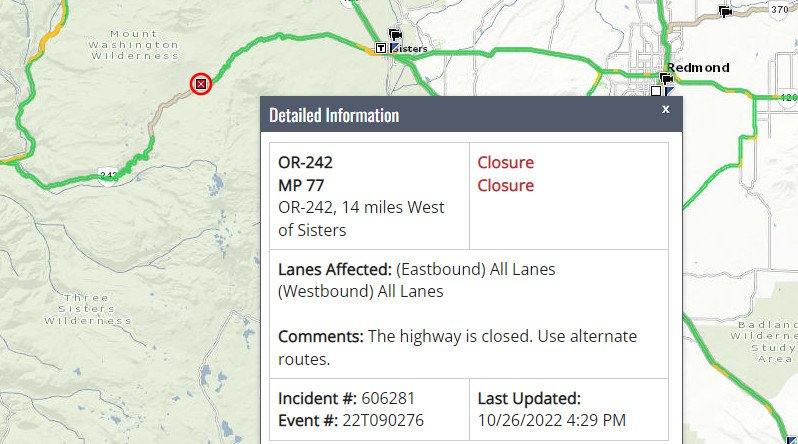 The crash was reported around milepost 77, 14 miles west of Sisters. There was no information regarding any injuries.

ODOT said crews would resume work Thursday morning and urged motorists to use an alternate route.

In fact, “if you plan to travel over any mountain pass, expect snow and make sure you and your vehicle are prepared,” ODOT Region 4 Public Information Officer Kacey Davey said.

The morning of Tuesday, Nov. 1, crews will close the highway from the western gate at Oregon Highway 126 to the eastern gate, just outside of Sisters.

“In the winter, we focus our staff and resources on main highways to keep them plowed, open and safe,” the agency said in its announcement.

When the highway is closed, it is closed to all users and is not maintained. Travelers going past locked gates and closure signs could encounter hazards and working equipment on the road, and there are no services or cell coverage.

Every year, McKenzie Pass opens and closes with the seasons. Dates vary, depending on road and weather conditions.

McKenzie Pass became a seasonal scenic highway in 1962 with the completion of the Clear Lake-Belknap Springs section of Oregon 126.

Even during its time as the main route between the Willamette Valley and Central Oregon, the narrow, twisting roadway and high elevation (5,325 feet) made the highway too difficult to maintain and keep clear during the winter months.

To see what routes are open over the mountains, and to view current road and weather conditions visit TripCheck.com or call 511.

More information on McKenzie Pass, OR 242, can be found on our website.