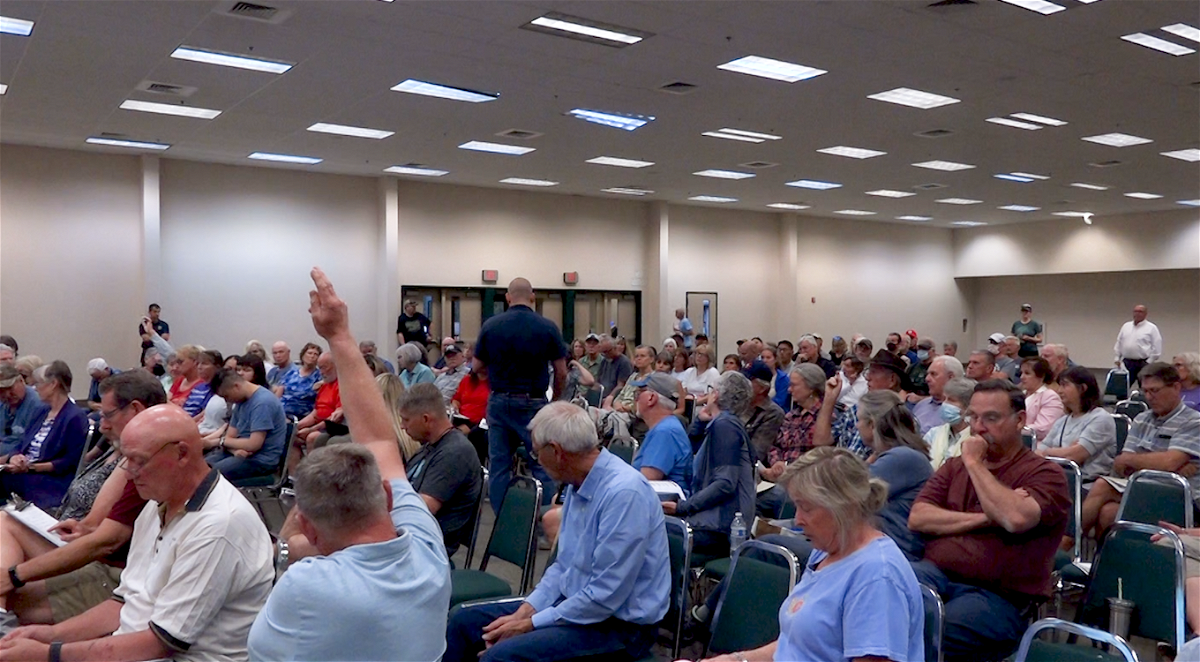 Hundreds of people attended the meeting at the Deschutes County Fairgrounds — so many that more chairs had to be brought in.

The agency released the map to meet the state Legislature’s June 30 deadline, but pulled it back over criticism regarding its accuracy in risk classifications. The Oregon Wildfire Risk Explorer was designed to educate people about wildfire prevention and show wildfire risk and local fire history.

The agency said it will work with Oregon State University on some changes to improve the accuracy of risk classifications.

An audience member drew applause when he said, “Fires that burns every other year in Central Oregon is in the yellow zone, while areas where we never had fires are in high or extreme zones at this point. So I think that’s one of the biggest probabilities — big questions people have — is why is my property is in extreme zones, and a mountain that lights on fire every other year isn’t?”

There’ll be another draft of the map prepared, along with more public meetings. Version 3 is set to be the final version of the map; the timelines have not been set.

The meeting took place in the Middle Sister Room of the Deschutes County Fairgrounds. It was not livestreamed online.

Here is a recording of an earlier community meeting, in Medford:

“Oregonians are fed up with Democrats continued assault on rural Oregon. These maps were rushed out the door, championed by Senator Golden, then after 1200 people in his own district area stood up against the maps, they were yanked back.” Senator Knopp said. “Southern Oregonians deserve better representation than Senator Golden, even in his own district he was not aware of the effect these maps would have on his constituents.”

It is important to note the quote from ODF Spokesperson Derek Gasperini “I don’t think that we anticipated the amount of response about the downstream implications,” he then went on to finish: “While we’ll have some minor adjustments, the map is not gonna look drastically different than it looks currently.”

Senator Knopp finished, “It is not going away, it will just get repackaged and sent back out again.”

Other quotes and statements from Mayors, Representatives, Senators across Oregon echoed last week.

House Republican Leader Vikki Breese-Iverson (Prineville) – “State and federal land mismanagement are the driving force behind our wildfire issues, not private land, but these maps leave most of the burden on private land owners,”

House Deputy Republican Leader Kim Wallan (Medford) – “Having experienced the tragedy of the arson-caused Labor Day 2020 fires, as well as the devastating smoke that we live with year after year, I am beyond frustrated that this bill and these maps are the way our state has decided to respond to the need for more and better forest management. … I listened to the whole thing, and there wasn’t anybody on there who was happy. Not one person said ‘this is a good idea.’”

Senator Lynn Findley (Vale) – “The intent behind Senate Bill 762 was to mitigate future significant loss, lack of preparedness and financial hardship in future wildfires, among many other things. Oregonians have been handed anything but that through the new map.”

Senate Republican Leader Tim Knopp (Bend) – “The growing outrage over high risk classifications of primarily rural property threatens to overwhelm the Oregon Department of Forestry with thousands of appeals that the agency will be unable to handle.”

“Ultimately, we need better management of our public forests at the state and federal levels so that we can begin to reduce the dangers of wildfire for rural and urban Oregonians alike.”

Representative Mark Owens (Crane) – “The map as it stands has no credibility and the Oregon Department of Forestry needs to take ownership and leadership and reevaluate immediately. This map serves as an ill-informed, unreviewed, and dangerous and divisive product pitting homeowners against the state of Oregon.”

Representative Lily Morgan (Grants Pass) – “The current map is simply unacceptable. I am disheartened that my constituents will have to spend their time and energy submitting appeals for an inaccurate map,” said Representative Morgan. “This just isn’t right.”

Mayor Randy Sparacino (Medford) – “Like many Southern Oregonians, I am relieved that our voices were finally heard and the proposed map was withdrawn. However, although the maps have been withdrawn, more rule making is still to come and will need to be addressed. The fight is not over!”

“The bill IS the problem, and I am committing to fixing it.  Landowners should not be required to shoulder the burden of fire protection while government lands go unmanaged and pose the greatest threat.”