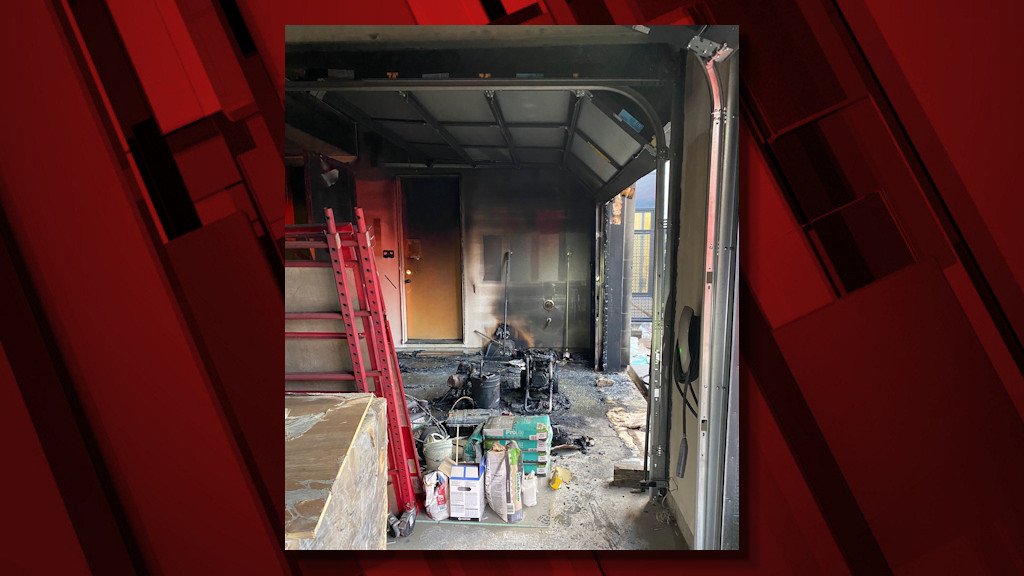 BEND, Ore. (KTVZ) – Contractors arriving to a nearly completed southwest Bend home Wednesday morning found a fire in the garage, called 911 and put out the remaining flames with a garden hose, officials said. The cause was found to be improper disposal of oily rags left by painters the prior night, the latest of several such blazes in the area.

Crews ensured the fire had not spread into other areas of the home and removed smoke from the home’s interior. An estimated $50,000 in damage was caused to the custom-built home, which is under construction and not yet occupied.

The painters had been staining interior doors in the garage, Derlacki said. When they finished, the rags and brushes were put in a bucket and the garage doors closed behind them.

Fortunately, Derlacki said, with the new construction methods used, the garage was mostly airtight, which allowed the ire to mostly self-extinguish due to lack of oxygen. It wasn’t until the mason contractors arrived in the morning and opened the doors that it got enough air to start burning again.

“This lack of oxygen prevented this from being a complete loss of this custom-built home along the Deschutes River,” Derlacki said in a news release.

It was at least the fourth Bend-area fire traced to oily rags since June, when a family of three escaped a burning northeast Bend home. A July fire caused $200,000 damage to a southwest Bend home and one last month caused $225,000 in damage to a log home on Deschutes Market Road.

The rest of Derlacki’s news release continues below.

The Bend Fire Department reminds everyone, homeowners and professionals alike, to be extremely cautious with oily rags when done with their projects. Properly disposing can be done very simply by putting all oil-soaked rags into water and keeping them there until disposal.

The most common type of spontaneous combustion fires is those caused by improperly disposed of oil and stain-soaked rags. Examples of these products are oil-based paints and stains, teak and linseed oils, varnishes and polyurethane, paint thinners, etc.

Spontaneous combustion of oily rags occurs when rag or cloth is slowly heated to its ignition point through oxidation. A substance will begin to release heat as it oxidizes. If this heat has no way to escape, like in a pile, the temperature will raise to a level high enough to ignite the oil and ignite the rag or cloth. The fire from this can spread quickly to other combustibles and cause great damage to your home or property.

Prevention of spontaneous combustion fires begins with good housekeeping. A clean work area can prevent a fire from spreading and getting bigger by not allowing the fire fuel to burn. Also understanding the potential for self-heating of rags soiled with oils such as linseed oil and turpentine is a key step in eliminating these preventable fires.

To properly and safely dispose of oily rags, Bend Fire Department recommends the following steps:
· Use a container with a tight-fitting lid. A metal can is preferable, but a plastic can or zip lock bag can work if nothing else is available.
· Place soiled and used rags inside and then fill the rest the way with water, seal the top and do not open it. This will prevent the oils from oxidizing, and thus keeping the rags from heating up and igniting.
· Contact your local garbage disposal company for their policy on disposal of the can and contents. Some companies will permit disposal in regular household trash.