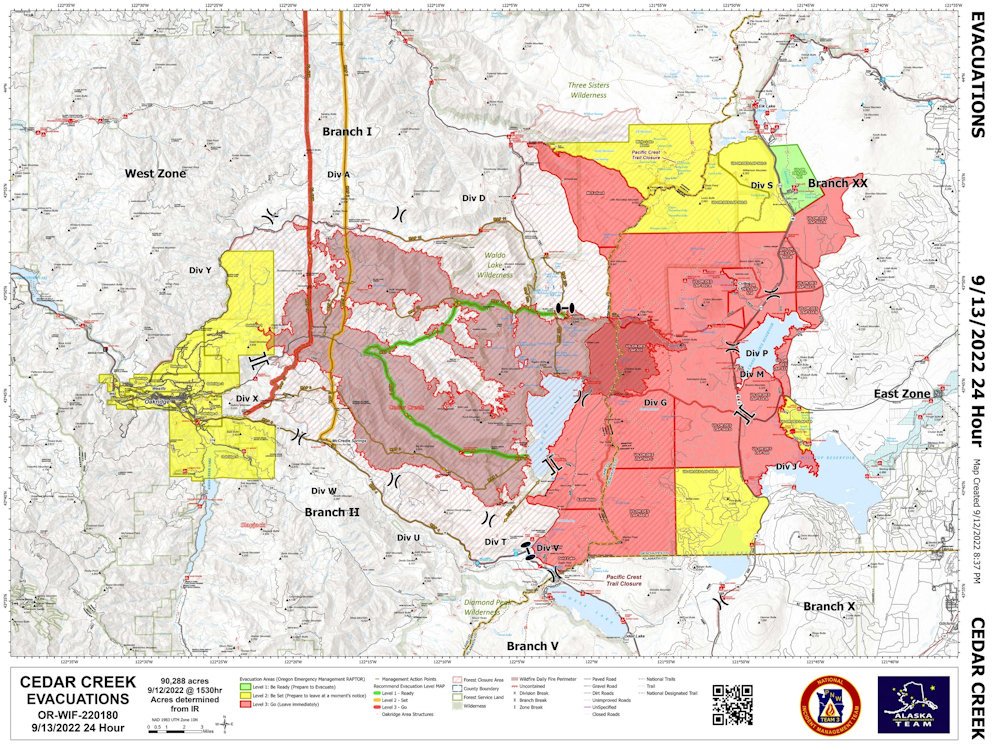 OAKRIDGE, Ore. (KTVZ) — A somewhat improved picture weather-wise made for less growth on the Cedar Creek Fire Monday, allowing reduced evacuation levels and for two of the seven task forces called in from around the country to return home, but it still grew another 6,000 acres to over 92,000 acres and is still considered 0% contained.

Current Situation: The Lane County Sheriff’s Office lowered evacuation levels Monday to lift the entire Oakridge area from Level 3 (Go Now) to Level 2 (Set). Eastern Lane County, east of Waldo Lake and north of Waldo Lake Wilderness, and western Deschutes County remain at Level 3. Fire officials will continue to work with local law enforcement to communicate fire conditions and keep the community safe. People who have mobility limitations or are particularly sensitive to smoke are encouraged not to return to Level 2 areas. Those who choose to remain in shelters will continue to receive services provided by the Red Cross. Smoke continues to create unhealthy air quality, which will likely continue for several more days. Smoke is now impacting communities on the east side of the fire, particularly La Pine, Crescent Lake, Sun River, and Bend.

A virtual community meeting will be hosted by East Zone’s Alaska Team tonight (Tuesday) at 7 pm. Join us on Facebook to learn more and have your questions answered.

The fire remains active and crews were engaged all around the West Zone perimeter with improving fire lines along roads and constructed hand and equipment line. As the sky began to clear on the West Zone Monday afternoon, air operations was able to fly reconnaissance missions to determine where fire growth occurred, verify containment lines, and look for opportunities for increasing containment. The fire was actively burning and was most active on the south side of Salmon Creek.

Tuesday, firefighters will continue to improve and prepare roads to be used as containment line. The fire is backing down toward containment lines. Crews are preparing roads to be used as fireline including Forest Roads 19, 2409, 5871, and 5853. The light precipitation had limited impact to fire behavior and crews are maintaining their momentum in suppression efforts during this window of opportunity. Task forces with the Oregon State Fire Marshal (OSFM) continued to assess and prepare structures Monday. This work included removing fuels and identifying hazards that can make fire suppression work difficult and dangerous. Due to the improved fire conditions, two task forces were demobilized Monday so they can return to their home fire districts. Five task forces from OSFM remain committed to the fire.

East Zone Operations: Operations in the East Zone focus on a containment strategy by strengthening existing or natural barriers. Fire crews remove fuels to create contingency line to protect communities, structures, and other values. The active fire edge with heavy fuels, high concentrations of snags, flammable lichens, and down dead trees is dangerous for firefighters. They engage directly on the fire when conditions are safe to do so. Air operations assist their efforts by dropping water or retardant to slow the fire’s progression. Recent heavy smoke has grounded aircraft, but these operations will resume as conditions allow.

Crews remove fuels along existing roads to improve them as a fire barrier. Along the west side of the Cascade Lakes Highway, crews are using heavy equipment to remove vegetation to create a shaded fuel break. Most of the flammable vegetation is removed, but trees remain, distanced about 40 feet from each other. Crews are brushing forest roads to create a stronger barrier to potential fire spread. In the southeastern edge of the fire, Forest Road 5896 on the north side of Odell Lake and Forest Road 4668 east to Davis Lake are being prepped. On the east edge of the fire area, south of Little Cultus Lake, two miles have been cleared along Forest Road 4290. A taskforce with the Oregon State Fire Marshal Office will be conducting tactical patrols near Crescent Lake and coordinating with local fire resources.

Crews protect structures by clearing surrounding brush, laying hose and sprinklers, and sometimes wrapping structures like signs or historic structures to protect them from fire. Crews have been implementing structure protection actions along Cultus Lake, Lava Lake, Crane Prairie Reservoir, and Odell Lake, among others. These efforts will also continue.

Weather/Fire Behavior: Scattered showers Monday resulted in 2-3 hundredths inches of rain across the fire area. Relative humidity recovery was very good and the heavy smoke layer continued to moderate fire activity. Cooler daytime and nighttime temperatures are expected for the next few days with light westerly winds. Fuels remain dry, especially down, dead trees. Some torching and spotting is expected, but most activity should be creeping and smoldering.