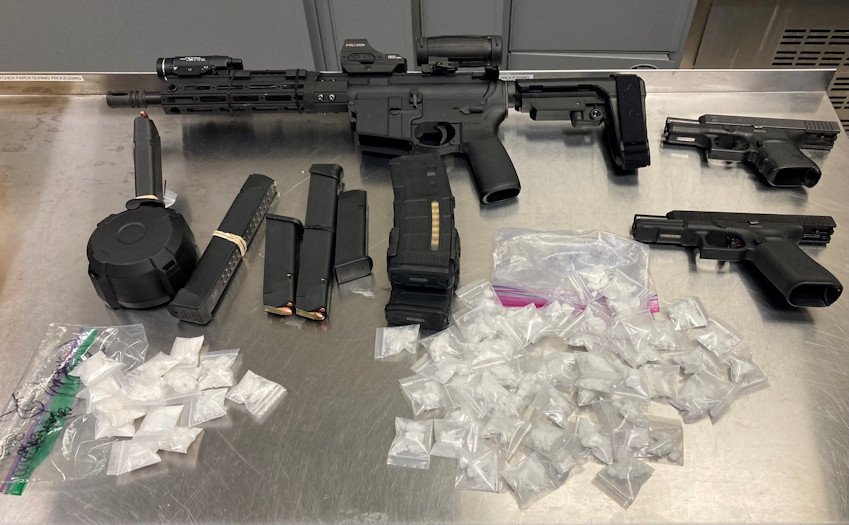 BEND, Ore. (KTVZ) – Central Oregon drug agents arrested a suspected cocaine trafficker in a northeast Bend traffic stop Tuesday evening and conducted a raid on his apartment, turning up a commercial quantity of the drug, along with two pistols, an AR-15 rifle and over $67,000 in cash.

The CODE Team concluded its investigation with the arrest of the 22-year-old Bend man around 5:30 p.m. when his car was pulled over at Lotus Drive and Purcell Boulevard, Sergeant Kent Vander Kamp said.

After receiving community tips, CODE detectives conducted surveillance of the man’s activities for several weeks. They allege he “was selling large quantities of cocaine in the area,” Vander Kamp said, also developing information that he was armed with a firearm.

CODE detectives sought and obtained a search warrant for the suspect, his car and apartment in the 2000 block of NE Linnea Drive.

Vander Kamp said that immediately after the traffic stop, detectives raided the man’s apartment. Another 22-year-old man was contacted there, he said, but it was determined he was not related to the investigation and was released at the scene.

The suspect was booked into the Deschutes County Jail on charges of cocaine possession and manufacturing and attempted delivery of a controlled substance.