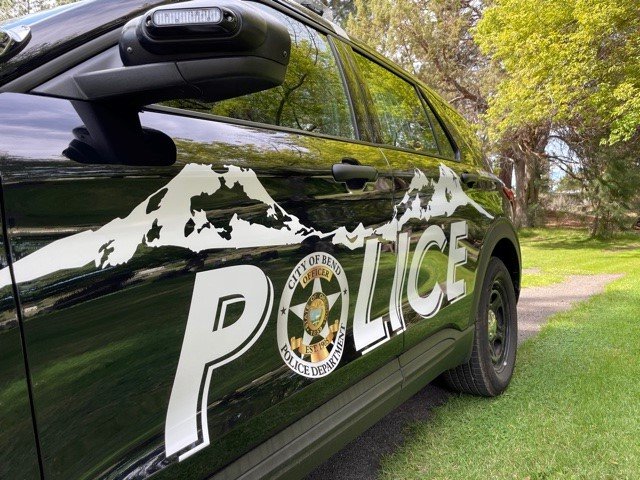 BEND, Ore. (KTVZ) – A northwest Bend woman confronted a man she found hiding under her bed Friday night, and he ran – but left behind a police property receipt from a day earlier, when he was arrested after being found sleeping in a garage on the city’s eastside, in possession of stolen high-end camping and hunting gear, police said.

It took a day, but he was found and arrested again Saturday, this time on more serious charges.

Police were dispatched around 10 p.m. Friday to a home in the 1400 block of Northwest Fourth Street on suspicion of burglary, said police Communications Manager Sheila Miller.

Officers learned the woman found a man whom she did not know hiding under her bed, but he fled when confronted, Miller said.

Officers identified the 27-year-old North Bend suspect after learning he’d left behind a property receipt Bend Police issued Thursday, after he was found sleeping in a garage on Bend’s Eastside and arrested on a trespass charge, Miller said.

The woman also told police of other, minor crimes the man is suspected to have committed at her home.

Police learned the man recently arrived in Bend and was staying at an area motel, Miller said. Officers searched for him overnight, visiting and sharing his photo with area businesses, encouraging them to contact police if he was spotted.

Police found and arrested the man around 2:30 p.m. Saturday on charges of first-degree burglary and third-degree criminal mischief. Miller said he’s also on probation for a third-degree robbery conviction in Coos County.

A Deschutes County Jail sergeant said the man was released Friday morning, pending a future court date, as the charge allowed. The new burglary charge is a Class A felony with a bail of $25,000, making it more likely he will stay there until his Monday court date.

On Thursday, officers responded around 4:30 p.m. to a home in the area of Northeast Emerson Avenue and Fifth Street on a trespassing incident involving the man, found sleeping inside the garage, Lt. Adam Juhnke said.

The man left the home when contacted by someone with permission to be there, but was located a few blocks away and arrested on a first-degree criminal trespass charge, Juhnke said.

When he was arrested, the man had a large duffle bag and backpack that contained several high-end pieces of hunting and camping equipment, from brands such as Sitka, KUIU and Vortex, with an estimated value of $3,000 to $5,000, the lieutenant said.

“Some of these items were still new in packaging or had original tags attached,” Juhnke said in a news release.

Investigating officers learned the items were not taken from the home where the man was found, but Juhnke said officers believe they were recently stolen in Central Oregon or in the Coos Bay/North Bend area on the southern Oregon coast, where he was last known to reside.

“The Bend Police Department is looking for help in identifying the owner(s) of these items, which include jackets, backpack(s), a sleeping bag, high-end binocular, knives, socks, tent poles and other items,” Juhnke said. “We are withholding certain identifying information in hopes the rightful owner(s) can contact us and provide proof of ownership and detailed information.”

Those with more information or seeking details are asked to call the non-emergency police number at 541-693-6911, reference case #2022-00023388, and ask to speak with Officers Martin Tabaco or Colton Henshaw.