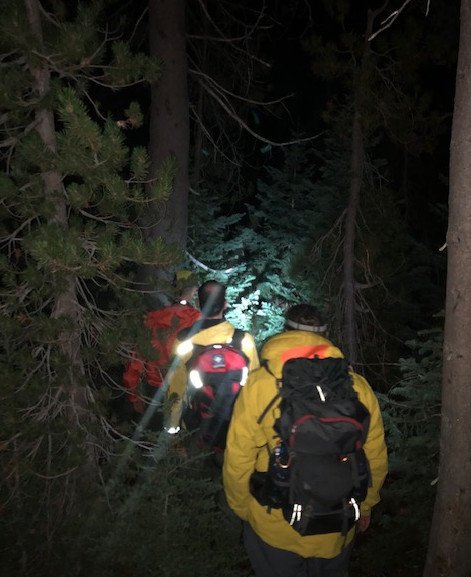 SISTERS, Ore. (KTVZ) – A Springfield woman who formerly lived in Bend and had summitted South Sister a dozen times lost the climbers trail on her descent Friday afternoon and became disoriented, calling 911 for help and prompting a search and rescue effort that included an AirLink helicopter crew spotting her from the air.

Deschutes County dispatchers got a 911 call around 4:20 p.m. Friday from the 61-year-old woman who said she’d been hiking alone with her dog when she lost her way while descending the 10,358-foot peak, Oregon’s third-tallest mountain, said sheriff’s Deputy Donny Patterson, assistant Search and Rescue coordinator.

The call was broken mid-conversation due to poor cell coverage in the area, Patterson said. A Special Services deputy assigned to DCSO SAR tried to call or text the woman several times but could not connect, nor did a cellphone ping to confirm her location succeed.

More than an hour later, a second call came from the South Sister area, this time to Klamath County’s 911 dispatchers. Patterson said that call also was limited by poor cell service, but the woman was able to relay that she had some food, water, warm clothes and an extra cellphone battery. She said she lost contact with another person in her hiking party and that she still had not found the climbers trail.

Shortly before 5 p.m., after several failed contact attempts and word there could be another lost hiker in the area from her party, a request was made for assistance from the sheriff’s SAR incident management team, Patterson said. AirLink also was contacted and volunteered to assist with an aerial search, as daylight was rapidly diminishing.

Without further contact from the climber, a SAR page was sent and a total of 12 volunteers, a sergeant and two Special Services deputies responded.

The AirLink crew spotted the lost woman in the area of the Le Conte Crater Trail, southwest of South Sister, and provided SAR volunteers with her GPS coordinates, Patterson said.

Around 6:30 p.m., two SAR teams left the Bend office and headed to Devils Lake to access the climbers trail, and volunteers began hiking into the area about 45 minutes later. They reached the woman around 8:15 p.m. and walked her back out of the area, reuniting with her partner at the Devils Lake Trailhead.

Patterson said the woman told rescuers she lived in Bend for 17 years and summitted South Sister 12 times, but lost the trail this time during her descent. She was unsure why but said she might have followed a spur trail others take into the area, thinking it was the main trail.

The woman had only her cellphone light for illumination, having forgotten her headlamp and GPS she normally takes when she hikes, Patterson said. The deputy said the woman “was experienced with the area — she just failed to check her pack for this trip, assuming she had what she needed.”

The sheriff’s office thanked AirLink for its assistance.