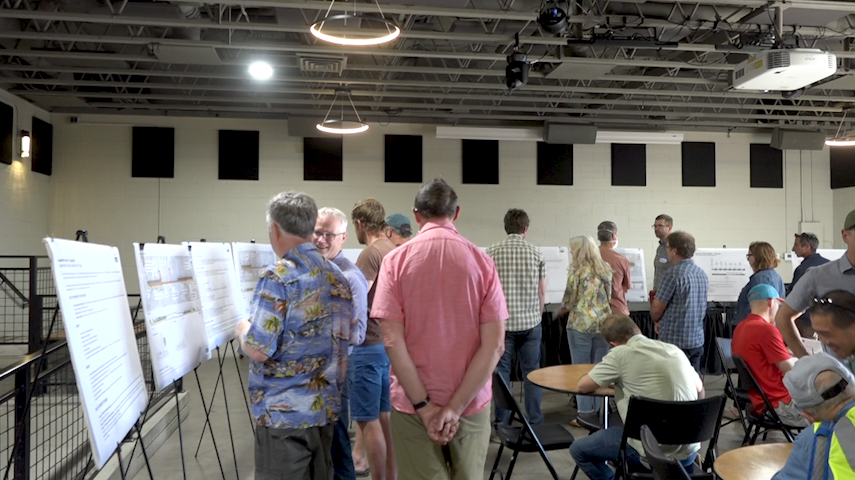 BEND, Ore. (KTVZ) — A city of Bend open house on the Midtown Pedestrian and Bicycle Crossings Feasibility Study drew a big crowd Wednesday night, as the Open Space Event Studios was packed with people eager to learn more about the project, and share their thoughts on the concepts drawn up so far.

The purpose of the study is to identify what’s possible for new and improved crossings of the U.S. Highway 97 Bend Parkway and Burlington Northern Santa Fe railroad for walking and bicycling in Bend’s Midtown. This study will look at three crossing locations: Greenwood, Hawthorne and Franklin avenues.

I asked Rory Rowan, the City of Bend’s Project Manager, if inflation is a worry and could scale back what can be achieved.

“Inflation is definitely becoming more of a concern with design and construction right now in this environment,” Rowan said. “But one of the reasons we’re really asking the public feedback is to help guide us on where the best use of the dollars will be.”

People were able to fill out a survey, sharing their thoughts on what they saw and heard.

Some avid bikers are looking for different options.

Bend resident Eric Holscher said, “I think the biggest thing is that we’re a little disappointed that there are no protected bike lanes, so there’s a lot of buffering with very little physical protection, which is really what we’re advocating for.”

Lynd Wieman, another Bend resident, said, “They need to make sure that what the safety factors really are and maybe making people safe would be done by education rather than expensive infrastructure.”

The open house included an overview of the project, design concepts, timelines and an opportunity to speak to the project team. This study is the first step in the project and will help inform all future action to make the crossing over the parkway a reality.

Those who didn’t make it in person can visit and weigh in on an online open house at bendoregon.gov/midtowncrossings  through July 3.

The Midtown Pedestrian and Bicycle Crossings project is one of many GO Bond improvement projects throughout the city. Learn more at bendoregon.gov/gobond.