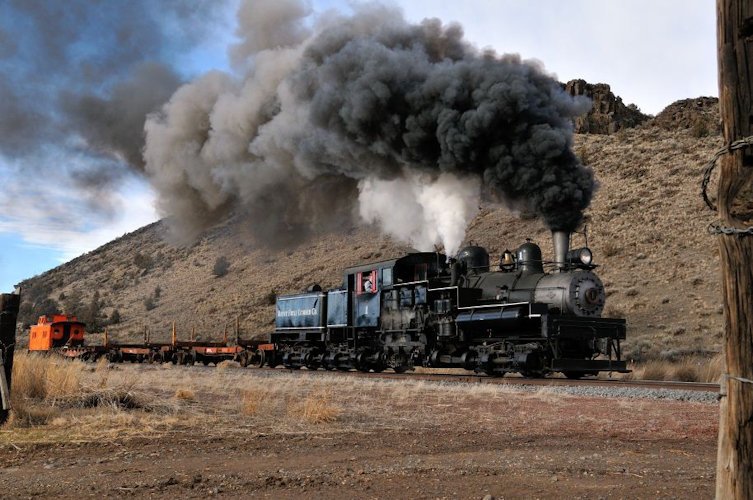 PORTLAND, Ore. (KTVZ) — The Oregon Historical Society and the Oregon Rail Heritage Foundation announced Friday the permanent transfer of the Mount Emily Shay #1 steam locomotive from the City of Prineville Railway to the Portland foundation.

The Mount Emily Shay was manufactured at the Lima Locomotive Works in Ohio in the 1920s. Shays are geared steam locomotives, specifically suited for mining and timber industries. While nearly 3,000 Shays were manufactured, only about 115 still exist today; even fewer are still operational.

The Mount Emily Shay was originally purchased by the Hofus Steel & Equipment Company of Seattle, then sold to the Independence Logging Company of Independence, Washington. It was eventually sold to, and named after, the Mount Emily Lumber Company, located in the city of La Grande in Eastern Oregon.

The Mount Emily Shay was owned and operated by the company until it was retired in 1957 and donated to the Oregon Museum of Science and Industry (OMSI) for use at its facility in Washington Park. When it couldn’t safely be transported to Washington Park, ownership was transferred to OHS in 1958.

The Mount Emily Shay went on long-term loan to the state of West Virginia beginning in the 1970s. The borrower restored the engine to working order (twice — it was damaged once due to fire), and the locomotive was operated on the Cass Scenic Railroad.

In the mid-1990s, OHS, with the guidance, expertise, and help of train enthusiast Martin E. Hansen, recalled the locomotive from West Virginia to be of service educating and thrilling Oregon constituents.

The City of Prineville requested an end to the loan agreement, and since OHS is not equipped to house nor operate a locomotive, the organization sought a new steward. A request for proposals was released in April and the Oregon Rail Heritage Foundation was selected to be the new owner of the Mount Emily Shay on Wednesday.

“The decision to not renew the operation agreement didn’t have anything to do with the ability to afford the operation of the locomotive. The decision was mutual between the Oregon Historical Society and the City of Prineville.

“When the City of Prineville decided to discontinue execution operations with the closing of the Crooked River Dinner train and focus on freight haulage in 2009, there was no longer a fit for a steam engine with our operation here.

“We, (the COPR and OHS) tried hard, and worked together, to find private and corporate sponsorship to continue the SHAY program in Prineville. Unfortunately, there was little interest in ticket sales or sponsorship when offered. Essentially we found this wonderful, rare artifact tucked away in our shop with no utilization or enjoyment for the public.

“Therefore, when it was time to make the decision, the city felt we could no longer do the locomotive justice by keeping it here and only operating it once or maybe twice a year. I am very excited to see this wonderful artifact go to the Heritage Foundation, where potentially 40,000 people a year will get to see the locomotive in operation.

“Additionally, the SHAY #1 will be a part of the wonderful education and hands on environment the foundation offers. This kind of exposure and environment would have been hard to provide in Prineville,” Wiederholt said..

Once physically transferred, the locomotive requires a federally mandated inspection before it can be operated again. ORHF plans to use the Mount Emily Shay to operate holiday and some weekend excursions between their museum location near OMSI to Oaks Amusement Park and back. Keep your eye on their website for updates!

OHS Deputy Museum Director Nicole Yasuhara says of the transfer, “The Oregon Historical Society sincerely appreciates the support of the City of Prineville in stewarding and operating the Mount Emily Shay for decades. We are thrilled that the Mount Emily Shay will have a new, permanent home at the Oregon Rail Heritage Center, where it will be on view and used for excursions, balancing preservation and access to this important piece of Oregon history.”

“The Mount Emily Shay will allow the Oregon Rail Heritage Center to show the public the important role logging railroads played in the development of the timber industry in Oregon,” said Roy Hemmingway, president of ORHF. “Specialty locomotives like the Shay, which could operate on steep and rough track, were able to access timber not available by other means  Shays were key to bringing logs to the mills and developing Oregon’s timber economy,”

About the Oregon Historical Society

For more than a century, the Oregon Historical Society has served as the state’s collective memory, preserving a vast collection of artifacts, photographs, maps, manuscript materials, books, films, and oral histories. Our research library, museum, digital platforms & website (www.ohs.org), educational programming, and historical journal make Oregon’s history open and accessible to all.We exist because history is powerful, and because a history as deep and rich as Oregon’s cannot be contained within a single story or point of view.

The Oregon Rail Heritage Center is a working rail museum in Portland, Oregon, that opened to the public on September 22, 2012. The museum houses three steam locomotives owned by the City of Portland. Of the museum’s three steam locomotives — Southern Pacific 4449; Spokane, Portland & Seattle 700; and Oregon Railroad & Navigation Co. 197 — the first two are restored and operable. Portland is the only city in the United States to own two operational steam locomotives. These magnificent steam engines are at the Center for all to see. Visitors are welcome to explore the Center and meet the volunteers who keep these engines in tip-top condition. General admission is free to the public during regular hours of operation. The project to establish the Center was led by the Oregon Rail Heritage Foundation.

The Oregon Rail Heritage Foundation is a registered nonprofit organization established in 2002 that is based in Portland, Oregon. Comprised of several all-volunteer groups dedicated to maintaining vintage railroad equipment, ORHF’s mission is “to provide for the preservation, operation, and public enjoyment of Portland’s historic locomotives, railroad equipment, and artifacts, and to educate the public about Oregon’s rich and diverse railroad history.”