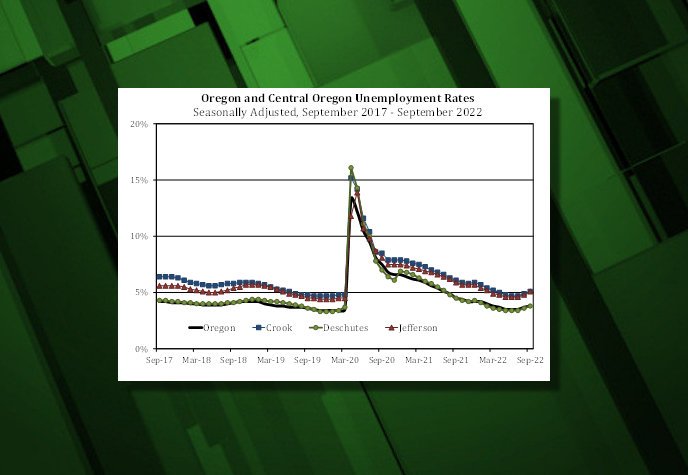 Crook County held steady in September, with 7,580 nonfarm jobs. Employment levels in Crook County are up 10.7% from pre-pandemic levels (+710 jobs).

The county added 480 jobs in the last year (+6.8%). Crook County’s rate of job growth remains among the fastest of Oregon’s 36 counties over the past year. Job gains remain concentrated in construction (+130), information (+130 jobs), professional and business services (+70), and manufacturing (+60). There were no notable industry job losses.

Total nonfarm employment expanded by 1.8% (+1,640 jobs) from September 2021. Accommodation and food services led private industry, with an over-the-year gain of 620 jobs (+5.5%). Mining, logging, and construction also performed admirably, adding 370 jobs (+4.6%). However, a few industries shed jobs in the past year, including financial activities (-160 jobs) and information (-120).

Jefferson County: The seasonally adjusted unemployment rate rose by 0.3 percentage point to 5.1% in September. The unemployment rate was 4.4% in November 2019 through January 2020, before the first impacts from COVID-19.

The rate of job growth is slowing in Jefferson County, with total nonfarm employment up 300 jobs over the past year (+4.6%). Job gains were concentrated in wood product manufacturing (+110 jobs) and leisure and hospitality (+60 jobs). Industry losses over the past year were limited to a drop of 10 jobs in wholesale trade, and a cut of 10 in financial activities.