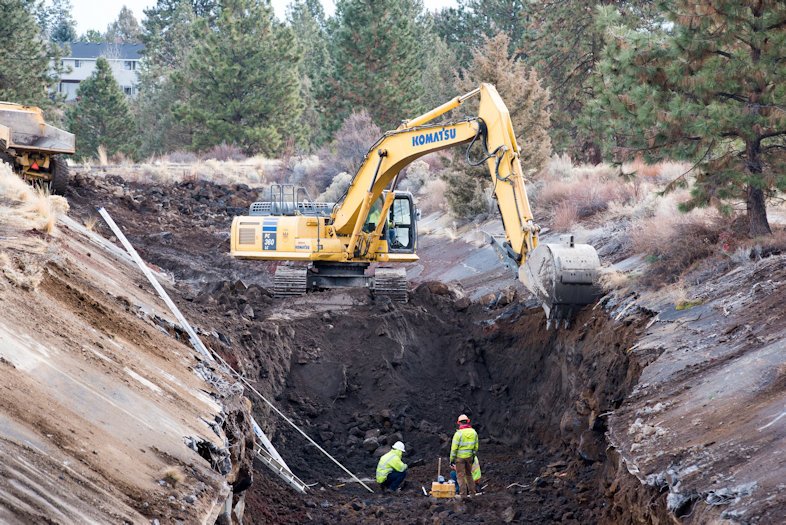 Here’s the rest of their announcement:

Despite a challenging irrigation season, the district completed the project on time and delivered 21 cubic feet per second (cfs) of conserved water through its pipe to North Unit Irrigation District. As a result, NUID will forego an equal amount of storage from Wickiup Reservoir this winter, with the specific timing of the additional flow in the Deschutes River to be determined in coordination with the U.S. Fish and Wildlife Service.

One hundred percent of the water conserved through the 7.9-mile piping project between Redmond and Smith Rock is being used to address flow imbalances in the Upper Deschutes to address the habitat requirements associated with the Oregon Spotted Frog.

“We accomplished what we set out to do by converting canals to pipes,” said Craig Horrell, Central Oregon Irrigation District Manager. “Our goal has always been to help our neighboring farmers, increase winter flows in the Deschutes, and enhance Oregon spotted frog habitat.”

Farmers were able to access much of their live flow and stored water supplies that were available even with the drought while simultaneously supporting fish and wildlife habitat and remaining in compliance with the Endangered Species Act.

“COID’s conserved water project didn’t deliver as much water in the first year as we hoped, due to the drought, but our farmers did benefit,” said NUID executive manager Mike Britton. “Every little bit of water helps.”

Horrell said due to the drought, an early season canal breach, and working through kinks with the new system, the district delivered 21 cfs, rather than 30 cfs as expected. “This is just the beginning of our conservation plan to boost releases by 200 cfs over the next seven years to meet the requirements of the Deschutes Basin Habitat Conservation Plan.”

As recommended by the USFWS, the districts began releasing 105 cfs this week, with the long-term goal to sustainably increase winter flows. The 21 cfs from COID’s conserved water piping project will be released at a later date to benefit the Oregon spotted frog. Per the Plan, conserved water can either be added to the base flow in the river all winter, approximately an additional 20 cfs for this winter, or the total volume of approximately 7,000 acre-feet can be released later in the season.

“The Deschutes Basin irrigation modernization projects are going to help us conserve water and improve winter flows in the river,” said Bridget Moran, field supervisor for the U.S. Fish and Wildlife Service. “However, the volume of water conserved (21 cfs) may provide a greater conservation benefit to OSF if released during the movement periods, which are disrupted by storage and release operations. In these initial stages of the Deschutes Basin Habitat Conservation Plan, there’s a stronger benefit to the Oregon spotted frog to store the saved water through the winter and release it at these important times during the frog’s life cycle. We’re working toward greater volumes that will have stronger biological benefit throughout the full winter season, and hope to achieve that in the next few years.”

Upper Deschutes River winter flows are anticipated to dramatically increase from 100 cfs to new flow rates determined through the Plan. Increasing the flows in the Deschutes River is critical for the Oregon spotted frog, listed as a threatened species under the Endangered Species Act in 2014.
The Plan signed between the USFWS and irrigation districts in the Deschutes Basin requires that the amount of water flowing in the Deschutes below Wickiup Dam be a minimum of 100 cfs until 2028 when the level will increase to 300 cfs.

The Plan provides a roadmap for sustainable water management in the Deschutes Basin while promoting the conservation and recovery of a species listed under the Endangered Species Act. In the Deschutes River system, that’s the Oregon spotted frog. Prior to agreements made between the USFWS and irrigation districts, the level of water flowing out of Wickiup in winter was as low as 20 cfs. The smaller releases allowed Wickiup to refill faster in winter than it can today. With potentially less storage water available, irrigation districts are now piping their canals as a way to conserve water for farmers.

“The irrigation districts’ focus on water conservation projects is paying off in a tangible way,” said Kate Fitzpatrick, executive director of the Deschutes River Conservancy. “Even in a year of extreme drought, one piping project in COID generated significant water for farmers in North Unit and is restoring  7,029 acre-feet to the Upper Deschutes River. We look forward to continuing to support the irrigation districts in this coordinated effort to balance water and improve river conditions in the basin.”

Horrell said, “The frequency and intensity of drought events highlight the urgency to update
antiquated irrigation infrastructure through water conservation projects like the one we completed. COID is committed to piping open canals and improving on-farm efficiencies to build a resilient future for agriculture, the river, and fish and wildlife habitat.”

###
About Central Oregon Irrigation District
Established in 1918, Central Oregon Irrigation District “COID” is a Municipal Corporation of the State of Oregon. The District’s mission is to provide a reliable supply of water to 3,500 patrons throughout Bend, Redmond, Powell Butte, and Alfalfa. COID operates and maintains over 400 miles of canals that collectively deliver water to approximately 46,222 acres of productive land.

COID has played a major role in the development of Central Oregon for more than a century and plays an increasingly important role in conserving water, improving drought resilience, and enhancing the environment. Since 2000, COID has increased stream flows in the Deschutes Basin by 133.57 cfs through conserved water projects and permanent instream transfers.
www.coid.org