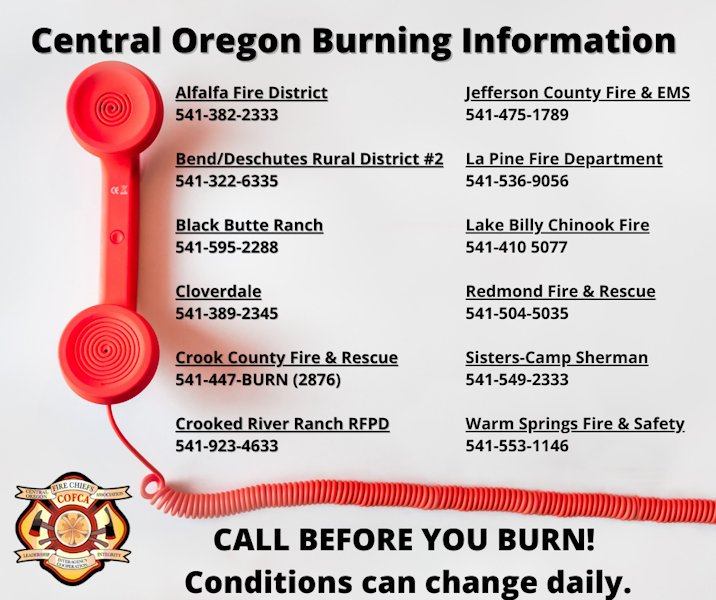 BEND, Ore. (KTVZ) — With the recent fall weather and precipitation received in areas, local fire departments, the US Forest Service, the Bureau of Land Management and Oregon Department of Forestry have agreed that many areas are now safe to enter into the burn season.

The Central Oregon Fire Chiefs Association is announcing that Tuesday, Nov. 1 will be the official start to when all local fire districts in Central Oregon are open.  Some local departments in the Bend and Sisters areas (outside city limits) have already opened debris burning based on the conditions in their area.

Even with many fire districts opening burn season, Central Oregon Fire Chiefs remind residents that they need to call their local fire district to ensure the district is allowing burning on a given day, and to obtain any necessary permits.

The Oregon Department of Forestry is officially ending the fire season on Saturday, Oct. 29. This will allow the general public on private lands within the Central Oregon District to conduct open burning with a valid permit from your local fire district or ODF.

There are several year-round burning bans as well in Central Oregon, including the City of Bend, the City of Sisters, and Sunriver. For residents who are uncomfortable burning or are not in areas where outdoor burning is allowed, the Deschutes Recycling Fall FireFree half-price event will be available to residents from October 29th through November 5th.  Visit www.firefree.org for details.

Central Oregon Fire Chiefs’ federal partners (US Forest Service & Bureau of Land Management) will also be performing prescribed burns throughout the region. These prescribed burns will be conducted under carefully planned conditions such as: with federal fire resources, professional fire managers and firefighters on scene, favorable weather conditions and carefully planned land plots.

These prescribed burns improve forest health and reduce the forest fuels in order to lower the wildfire risk to our communities that is ever present later in the season when the conditions are even more extreme.

More information can be found at https://www.centraloregonfire.org/.  Residents can also text ‘COFIRE’ to 888-777 to receive wildfire and prescribed fire text alerts.