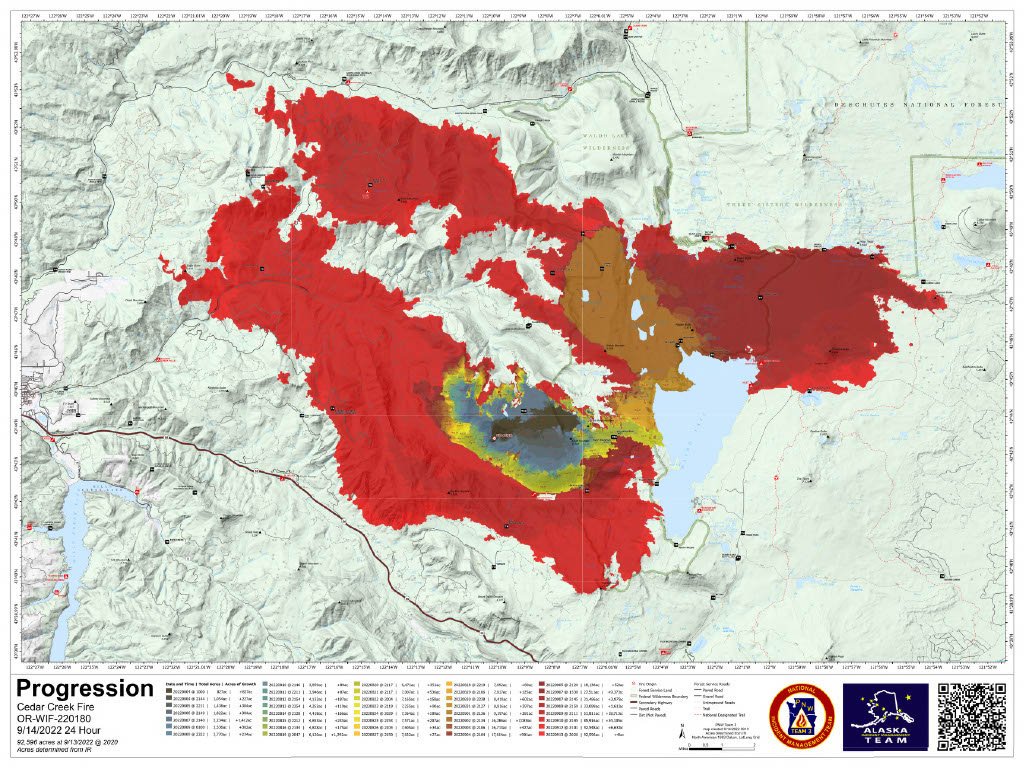 OAKRIDGE, Ore. (KTVZ) — The Cedar Creek Fire did not grow in size Wednesday, but it is still actively burning and drawing a still-growing firefighting force of over 2,150 people, as the price tag to fight it so far has reached $57.9 million, officials said Thursday.

Current Situation: The fire remains active, mostly burning with low to moderate intensity on the perimeter where fuels and topography are conducive and in the center of the fire within a large pocket of unburned fuels. Some spotting and torching is occurring in the East Zone carried by westerly winds. Although fire behavior has calmed considerably since last weekend, fuels are still dry and fire behavior could increase under the right conditions. Smoke will continue to linger through the week, impacting air quality.

Oakridge Community Meeting: A community meeting for the communities of Oakridge and Westfir is scheduled for Saturday, September 17 at 11 am at the Oakridge High School Auditorium. The meeting will also be streamed on Facebook Live.

West Zone Update: Firefighters continued improving firelines to protect the communities of Oakridge and Westfir. Clear weather on the west side of the fire allowed firefighters to conduct firing operations in multiple areas around the fire perimeter. Aerial ignition occurred in the northwest along the ridges near Huckleberry Lookout and northeast of Kwis Kwis Butte to reduce fuels along the steep slopes. Burning these ridges ahead of the main fire brings the fire toward the containment lines while the weather is favorable and reduces the intensity of the main fire when it reaches the fireline. In addition, firefighters conducted burning operations to bring fire along the containment line on Forest Road 2409. All seven helicopters and the airplanes assigned to the fire were actively engaged throughout the day to support firefighter operations on the ground. During the night shift, firefighters patrolled the areas where daytime burning operations occurred.

West Zone Operations: Firefighters will continue to build on the successes from the past few days. On the southern side of the fire, crews are improving the firelines near Fuji Mountain and conducting burning operations to establish an anchor point for containment. Crews will keep preparing roads to be used as control features through chipping and thinning operations as well as removing snags to reduce hazards to firefighters. As conditions allow, firefighters will use firing operations to improve the control features and bring the main fire toward the containment lines.

Nearly a week ago, a rare east wind occurred, and tough decisions were made to evacuate the entire city of Oakridge and the High Prairie area. Firefighters throughout the state of Oregon responded to Oakridge to protect the city and the nearby communities of High Prairie and Westfir. Fire crews stood ready to protect lives and homes, but luckily the fire didn’t reach the city. Since that weekend, favorable weather has moderated the fire’s behavior, as is reflected in changing evacuation levels.

As the threat dissipated and lots of work was done to prepare homes, structural taskforces have been strategically released to return to their local fire departments. Today the last taskforces with the Oregon State Fire Marshals will head home to serve their local communities. Should the risk to nearby communities change, a plan is in place to mobilize structural firefighters. For that reason, firefighters ask that homeowners leave up the green placards that are important for firefighter safety if they must defend your home. Structural firefighters are proud to have served these communities and remain committed to their safety and protection.

East Zone Operations: Firefighters are using multiple strategies to protect the values in the Cascade Lakes region: point protection of homes and recreation infrastructure, containment lines to create a fire break and a safe zone for firing operations, and direct suppression where possible. After an assessment on Wednesday, conditions appear favorable to go direct on the edge of the fire east of Waldo Lake near Forest Road 4290 near Charlton Lake to keep the fire from moving farther south. That work will begin today. Night crews are being put in place in anticipation of burn operations.

Multiple efforts creating fuel breaks are underway and will continue through the week: Forest Road 5897 from State Route 58 to Fuji Mountain Trail; hand crews are working to join Forest Roads 4660 and 4668; and Forest Road 700 near Brown Mountain, south of Crane Prairie Reservoir. Heavy equipment continues to be used to create a shaded fire break along the Cascade Lakes Highway, with crews working sections of roadway from different directions.

For firefighter and public safety, please drive carefully along Highway 58 and other roads around the fire. Crews and heavy equipment are using these roads to access the fire.

Weather: Weather conditions are expected to stay moderate with light west winds and cooler seasonal temperatures with highs in the 60s and lows in the 30s. The next chance for rain is over the weekend with a weather system coming in on Saturday.

Evacuations: An updated map of the evacuation areas is available at www.LaneCountyOR.gov/CedarCreek. It is possible that conditions may require moving back to a Level 2 (Be Set) or a Level 3 (GO NOW) evacuation notice in some or all of these areas, depending on fire activity. Sign-up for emergency mobile alerts by going to oralert.gov. Please check with Lane County Sheriff’s Office at 541-682-4150 and Deschutes County Sheriff’s Office at 541-693-6911 for updates and changes. Go to https://bit.ly/3D51kvC to view a map. Lane County people can use the Lane County Sheriff’s Office Flash Alert site for information to support insurance claims for reimbursement for lodging https://flashalert.net/id/LaneSheriff.