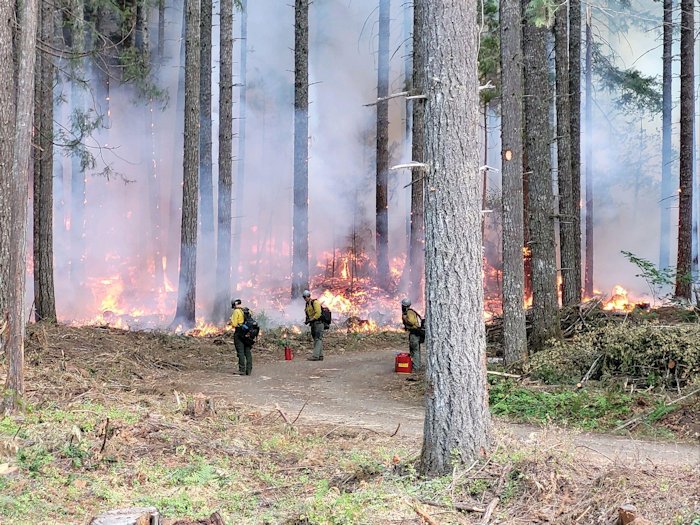 OAKRIDGE, Ore. (KTVZ) — Firefighters are conducting burnouts to rob the 93,427-acre Cedar Creek Fire of fuel to advance, though that also has contributed to the heavy smoke keeping some areas of the High Desert at unhealthy air quality levels.

The cost of the firefighting operation as of Friday has reached $61.9 million, according to the National Interagency Fire Center.

Current Situation: The Lane County Sheriff’s Office reduced the evacuation level in all zones in and around the cities of Westfir, Oakridge, and High Prairie to Level 1 (Be Ready). A current map of the evacuation areas in Lane County is available at www.LaneCountyOR.gov/CedarCreek.

Improving roads to serve as control features, firing operations, securing containment lines, and patrolling burned areas are all components of ongoing firefighting activities. Area residents will likely notice an increase in smoke as these important firing operations continue. In addition to the fire traffic, increased smoke and potential fog will affect visibility. Many forest and road closures remain in effect. For firefighter and public safety, please drive carefully, obey all road closures and traffic safety laws, and give firefighting crews and heavy equipment plenty of space.

Though the Cedar Creek Fire is zoned and being managed by two Incident Management Teams, firefighters on the two zones are working in close coordination and are sharing firefighting resources. In the West Zone, the fire is backing downhill, flanking, and occasionally torching in dense timber. In the East Zone, the fire is minimally active; occasional torching and westerly winds may result in a slight increase in fire growth. These conditions are also facilitating the consumption of unburned fuels in the interior of the fire area. Smoke will continue to linger, impacting air quality.

Oakridge Community Meeting: A community meeting is scheduled for 11 am Saturday, September 17 at the Oakridge High School Auditorium. The intent is to also stream the meeting on Facebook Live.

West Zone Update: The western edge of the Cedar Creek Fire remains three to five miles from the town of Oakridge. Thursday, the last task forces with Oregon State Fire Marshals headed home to serve their local communities. Pacific Northwest Team 3 sincerely appreciates the hard work and contributions made by Oregon State Fire Marshals in protecting the homes and communities in and around Oakridge. Should the risk to nearby communities’ change, a plan is in place to mobilize structural firefighters.

As illustrated on the animated fire progression map at https://bit.ly/3S6IFUv, significant fire growth was associated with east winds about a week ago. Fire spread since then has largely been associated with burnout operations intended to bring the fire toward containment lines while weather is favorable and to reduce the intensity of the main fire when it gets there.

East Zone Operations: A hotshot crew went direct on the fireline around Charlton Lake where the fire spilled over FS 4290. Crews are strengthening the FS 4290 to serve as a control line to prevent future potential spread of the fire to the south. Crews are working FS 5897 to tie into the FS 4290 road to the north and to the Fuji Mountain trail and State Route 58 to the south. Structure assessment and protection is ongoing on the north shore of Odell Lake, including Shelter Cove and Sunset Cove, and the Diamond Peak subdivision. Road treatments are continuing on the west side of FS 4668 to meet 4660, creating a fuel break between Odell Lake and Davis Lake. Similarly, road work is continuing on FS 700 to connect with FS 4630 that will tie together Crane Prairie Reservoir and Little Cultus Lake, and around the southwest side of Cultus Mountain to create a fuel break for Cultus Lake. Work continues along the west side of the Cascade Lakes Highway to create a shaded fuel break.

Weather: Today’s (Friday) weather will be consistent with the last few days. Lingering low clouds and smoke may inhibit air operations. A low-pressure system is moving in on the weekend with a chance of rain.

Evacuations: An updated map of the evacuation areas is available at www.LaneCountyOR.gov/CedarCreek. It is possible that conditions may require moving back to a Level 2 (Be Set) or a Level 3 (GO NOW) evacuation notice in some or all of these areas, depending on fire activity. Sign-up for emergency mobile alerts by going to oralert.gov. Please check with Lane County Sheriff’s Office at 541-682-4150 and Deschutes County Sheriff’s Office at 541-693-6911 for updates and changes. Go to https://bit.ly/3D51kvC to view a map. Lane County people can use the Lane County Sheriff’s Office Flash Alert site for information to support insurance claims for reimbursement for lodging https://flashalert.net/id/LaneSheriff.