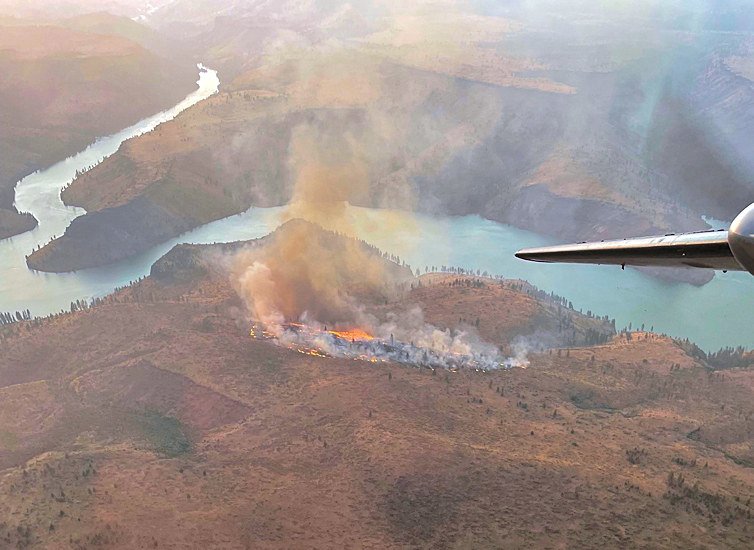 The Fly Creek Fire near the Balancing Rocks along the Metolius arm of Lake Billy Chinook was one of eight starts reported in that area of the Sisters Ranger District in Jefferson County. It had grown to 30 acres by late Sunday night, with zero containment, Forest Service spokeswoman Kassidy Kern said. Crews also were working several others into the night.

Kern said the fire was “moving quickly in grass, brush and juniper.” Firefighters responded along with three heavy air tankers that were able to drop several loads of retardant on the fire before dark. Engines and crews remained on the fire into the night, along with a bulldozer, working to construct containment lines.

Due to rapid fire growth on Fly Creek, the Jefferson County Sheriff’s Office issued a Level 3 “GO NOW” evacuation notice for the Perry South and Monty campgrounds and a Level 2 “GET SET” fire evacuation notice was issued for the Three Rivers and Montgomery Shores areas. For more information, visit https://www.facebook.com/JeffersonCountyORSheriff.

Sheriff’s deputies responded to the two campgrounds to deliver the evacuation notice and assist campers in leaving the area, Sgt. David Pond said. An emergency alert was also sent, but deputies responded due to lack of reliable cell service in that area.

The first text alert sent authorities shortly after 8 p.m. warned people in the Three Rivers-Lake Billy Chinook area to “Get Ready Get Set to Evacuate.” A text update at 9:40 p.m. said the Level 2 notice was for the Three Rivers and Montgomery Shores areas: “Please be ‘set’ to go if needed!”

Earlier Sunday evening, firefighters had responded to three new lightning-sparked fires, two on the Ochoco National Forest and one on the Crescent Ranger District of the Deschutes National Forest. All were held small, 1/10th of an acre.

In total, 16 “smokes” were reported Sunday afternoon and evening across Central Oregon. Firefighters were responding to seven late Sunday and will engage the remaining fires Monday.

In advance of the latest round of storms, two “heavy” Skycrane helicopters were positioned at Bend Airport, Kern confirmed Sunday.

One small brush fire Sunday evening south of Redmond may have had a more worrisome, even criminal cause.

Witnesses said a driver heading south on Southwest 61st Street at Young Avenue was throwing burning (smoking) materials out the window, according to Redmond Fire & Rescue. Their crews stopped the fire at an eighth to a quarter-acre.

Stormy weather also tested lines over the weekend on the 41-acre Tolo Mountain Fire on the Crescent Ranger District, which reached 20% containment Saturday.

Meanwhile, a new fire, the Windigo Fire, about five miles north-northwest near Windigo Pass on the Umpqua National Forest quickly grew to 1,300 acres, prompting closure of the Pacific Crest Trail and other trails and forest roads in the area. It was burning in timber off Forest Service Road 60 on the Douglas-Klamath county line.

The National Weather Service has issued another Red Flag Warning for abundant lightning across most of Central Oregon Monday. Isolated to scattered thunderstorms are forecast, along with the potential for gusty outflow winds that may challenge fire suppression efforts.