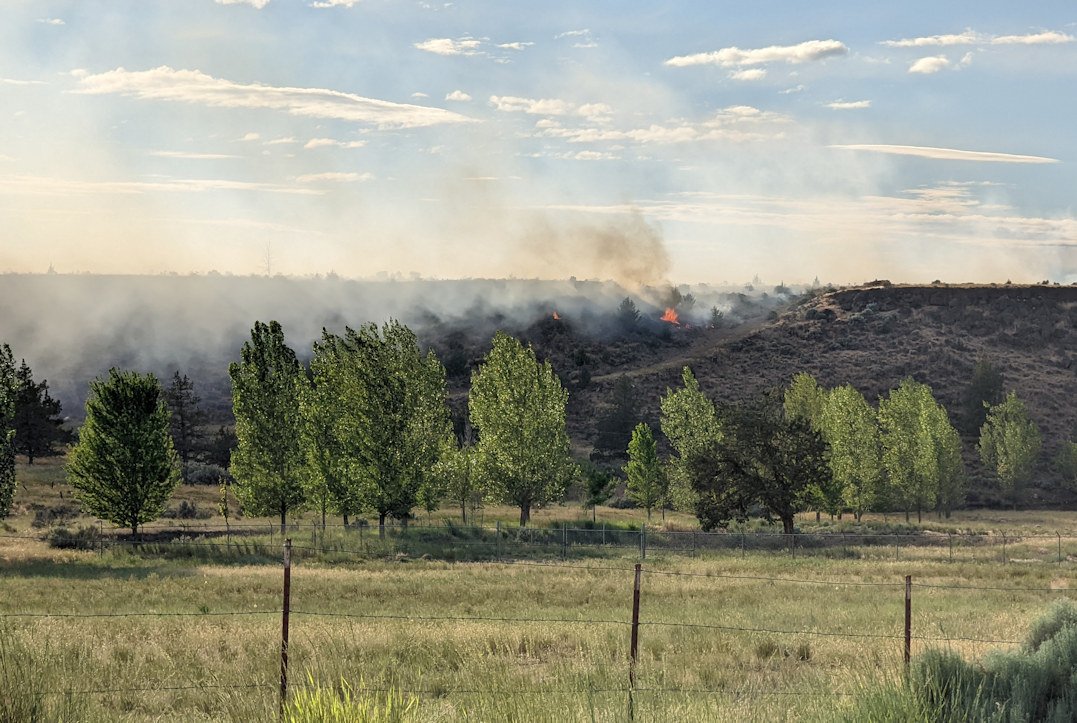 BEND, Ore. (KTVZ) – Dozens of Central Oregon firefighters spent much of their holiday weekend responding to more than a dozen small fires since intense thunderstorms rolled through the region on Saturday, and officials said they will be watching for more “sleeper” or holdover fires in coming days.

About 40-50 firefighters responded to 14 fires around the area in the 24 hours ending Sunday afternoon, officials said. The largest burned about seven acres on the BLM’s Prineville District but was largely extinguished by significant rain that accompanied the storms.

Shortly before 7 p.m. Sunday, Jefferson County Fire & EMS and sheriff’s deputies were dispatched to a brush fire that broke out on private land in the area of SE McTaggart Road and Sagebrush Drive, Sheriff Jason Pollock said.

Jefferson County Fire & EMS Chief Jeff Blake confirmed Tuesday that the fire southeast burned about nine acres of grass and cheatgrass. He said six of their agency’s resources were dispatched to it, along with three BLM engines.

The fire prompted a Level 1 ‘Be Ready’ pre-evacuation notice to some homes along Dry Gulch Drive; Blake that was done as a precaution because a storm cell moving in threatened to kick up some winds.

Blake said the cause of the fire wasn’t lightning, but “burning discarded material,” though they were unable to be more specific and determine if it was smoker’s carelessness.

Officials said Sunday evening that firefighters had picked up two new starts since noon and smokejumpers were working two fires in the Mill Creek Wilderness. They noted a new round of storms and lightning moved through Sunday evening, tracking from La Pine through Bend and onto the west side of the Ochoco National Forest.

They said firefighters were making good progress by Monday evening, with several engine crews on scene and a small helicopter cooling hot spots.

On Tuesday, officials said two engine crews continued to work Incident 326, south of Sheridan Mountain on the Deschutes National Forest. The fire held overnight at about a half-acre and got some welcome rain, but still was putting up visible smoke Tuesday.

Holdover, or “sleeper” fires can start up to two weeks after a lightning strike, so lookouts and others around the region will be watching closely.

Another strong thunderstorm was reported shortly before 3 p.m. over the southwest part of the Warm Springs Indian Reservation, about 20 miles east of Detroit.

Though the lightning and its dramatic Fourth of July sky show was coupled with heavy rain over a wide area, firefighters responded to 10 new “single-tree starts” due to lightning by 6:30 p.m., mostly on the Deschutes National Forest and Prineville District BLM east of Bend.

More than 10,000 Pacific Power customers lost power shortly before 6 p.m. Saturday due to an apparent storm-related cause, utility spokesman Drew Hanson said. About 1,000 got power back an hour later, as crews patrolled lines, and most 8,000 were restored around 7 p.m., with the rest by 7:30 p.m.